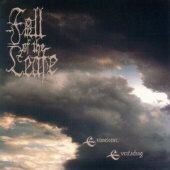 Type: Full-Length
Release Date: 1998
Label: Defiled Records
Genre: Folk, Gothic
1 The Celestial Keeper
2 ...And The Heavens Fell
3 The Garden By The Shoreless Sea
4 Wings Of My Desire Untamed
5 My Weeping Goddess
6 Starfire
7 With Each Fall Of The Leafe
8 Within The Everfrozen Winternight
9 Evanescent, Everfading
MetalBite on YouTube
MetalBite on YouTube

Fall of the Leafe were one of many Finnish melodeath bands that formed in the 90s, who like most members of the scene later softened their sound to a more atmospheric, gothic metal approach. And from the first song of their first album, I can comfortably say that they find themselves at the very top of a scene brimming with talent.

Fall of the Leafe have a Maiden-esque approach to their riffs which can be heard from the very beginnings of 'The Celestial Keeper'. The difference between the two bands' guitarwork, however, is that instead of speedily 'galloping' as Maiden's riffs do, Fall of the Leafe instead opt for a more mid-tempo, steady approach, as if boldly striding through a mystical woodland. This is aided by a rhythmic drum beat which doesn't falter for the whole duration. I'm a fan of this approach - it doesn't get overwhelming, it doesn't feel like it's over too soon and it leaves the listener plenty of time to become immersed in Jussi Hänninen's eloquently constructed soundscapes.

Of course, 40 minutes of mid-paced riffs wouldn't be interesting if there was no variation, but luckily Hänninen delivers in spades on this front. We're treated to constant seamless transitions between different melodies, with the mood of the song also seeing a switch at these points (my favourite example being the way the rhythm guitar just drops away as the lead changes at halfway point of 'Starfire'). One interesting side-effect of many different emotions being contained within one song is that it makes the ends and beginnings of songs feel less significant, so as a whole Evanescent, Everfading feels like a singular, cohesive piece with many atmospheres, arcs, twists, and turns. While that means each song absolutely holds up on its own, it's an album I find myself incredibly unwilling to pause halfway through, wanting to experience the odyssey from start to finish.

The riffs and even to an extent the way they're weaved together are comparable to several of Fall of the Leafe's contemporaries such as Amorphis and Insomnium, but one thing that is completely unique to them is their vocals. Jani Lindstrom gives us a full tour of his capabilities, from mid-range black metal screams to secretive whispers to storytelling, narrative spoken-word segments. The vocals change in mood and tempo as often as the riffs, which is a detail that most melodeath of this calibre lacks and thus that I really appreciate.

The lyrics are just beautiful, there's no other way to put it. They play into the sense of exploration and wonder carried by the guitarwork and occasional integration of subtle synths, with imagery of nature, grandiosity and mysticism. Lindstrom's poems speak of gods, starlight, mortality and how raw, human emotion fits into the puzzle of existence. From what I know of the band's writing process, Hänninen would write a song then hand it over to Lindstrom who would write lyrics to fit it. And he takes the riffs given to him and draws out every bit of emotion in them, eloquently expressing feelings I find it hard to even begin describing. If you're still wondering about the overall mood of this album after reading this review, take a look at the lyrics - they're a much better indicator than I could dream to be.

Overall, Evanescent, Everfading pretty neatly encapsulates why I love Finnish music, being one of many near-perfect melodeath albums to come out of the country in its heyday. It's a one-of-a-kind record, and despite hours spent searching the depths of the metal archives I have never been able to find anything quite like it. Plenty tried and plenty came close, but the atmosphere and mysticism reached here is unparalleled and sadly none of the rest of Fall of the Leafe's material comes close, as they suffered from both the loss of the vocalist shortly after the album and a radical shift in sound later on. Evanescent, Everfading, however, will always stand tall, a towering monument of its homeland.