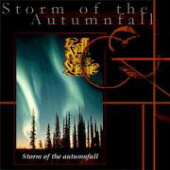 Type: Demo
Release Date: 1996
Label: Self Released
Genre: Folk, Gothic
1 Into The Autumnsphere
2 Storm Of The Autumnfall
3 The Garden By The Shoreless Sea
4 Starfire
5 Upon The Verdant Vales Of North

It was a cold day in 1996 when an aspiring Finnish metal musician named Jussi Hänninen decided to start a band with his riffs as the basis, bringing in a few friends to cover the duties he could not. I've covered Fall of the Leafe's debut album in a separate review, and since I rapidly lost interest with each subsequent release I listened to, the only way to go is backwards, to the very first demo.

Storm of the Autumnfall consists of five tracks, three of which later made their way onto studio releases while two remained exclusive to the demo. Compositionally, it's about exactly what you'll find on the debut, pounding, mystical riffs mid-paced riffs that bring to mind long journeys and ancient forests. Two of my favourite tracks from Evanescent, Everfading - 'Starfire' and 'The Garden by the Shoreless Sea' - originated here, and hearing them in their early phases gives a great sense of how the band progressed. The most noticeable difference is in the vocals - Jani Lindstrom clearly had a lot less confidence in his voice at this point, never straying beyond his "default" mid-range screams. They're capable and serve their purpose as a vessel for the poems he penned, but his performance is admittedly generic compared with how varied he is on the full-length. There's no whispers, wails or deeper growls and only one instance of spoken vocals to be found on the whole demo, so this is one department which definitely improved in the time between the two releases.

The timings where the vocals come in also feel slightly off. There's a heightened sense of disconnect between them and the guitars, meaning the demo feels more like two completely separate compositions played over one another rather than one cohesive piece. Crucially, though, that's not a bad thing. For one it adds to the amateur, home-made atmosphere that so many self-produced bands thrive off, and the rawer audio quality only serves to double down on this. At many points you can actually hear the audio skipping out where two tapes were spliced together, so those who find a certain charm in an amateur, thrown-together aesthetic would do well to track this demo down.

Another key feature of this demo that the band would almost immediately abandon is the bass. Unlike Fall of the Leafe's other material, the bass here is absolutely audible and even prominent in the mix, letting you hear new elements of familiar songs. It plays subtly different lines to the guitar and the two instruments complement each other well. An elsewhere unseen dimension to the sound is offered, and that alone makes Storm of the Autumnfall a must-listen for fans of Evanescent, Everfading. From Hänninen's mystical, woodland-evoking melodies that bookend the release to the three elegant forays into Lindstrom's mind between, there's a lot to love here.