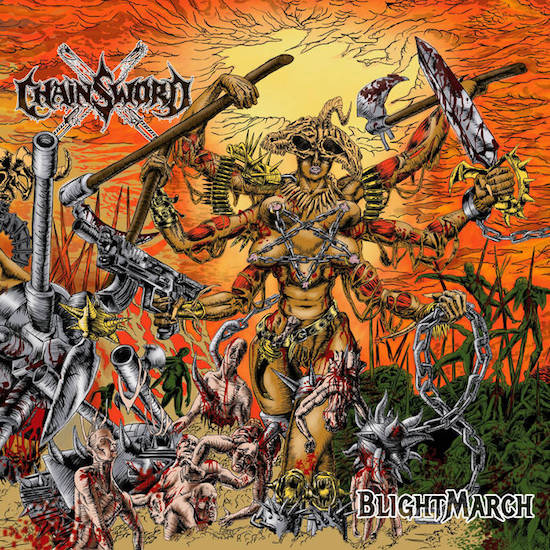 Polish band Chainsword from Warsaw was until now still a relatively blank sheet since they have so far released only two singles. But that could change pretty quickly with their debut album Blightmarch. Even if the cover seems a bit infantile, it is somehow also cult. But well, ugly covers don't always speak for bad music, as you can see on the example of old Protector albums.

Musically, the Poles fish in the waters in which Bolt Thrower, Asphyx and consorts have already been around or are still doing. Sawing riffs paired with thundering drums are to be found here primarily, sometimes the band shifts down a gear. But the whole thing comes across as extremely brutal and the two singers contribute their part through deep shouting, overlaid with high-pitched screams, which reminds me in parts of very old Deicide albums. What comes across quite appealing, are the interspersed guitar solos, which make the whole thing varied and well worth listening to.

Lyrically, there is a colorful mixture of stories from the Second World War ('Eastern Front 1942: Moscow' and 'Eastern Front 1943: Stalingrad') and other visions of horror caused by weapons and war, here miss something the thread, but that is beside the point with the convincing music.

The production is basically well done and in my opinion quite appealing. The drums sometimes sound a bit dull but otherwise the album sounds like a death metal album must sound in my eyes. Blightmarch was produced at Primate 666 Studio (vocals, bass and guitars), the drums were recorded at Nebula Studios. Kind of strange to record the instruments in two different places, maybe it's Corona. But okay, the result is right.

Recommended songs of the album are 'Horus the Chosen One', which has quite interesting riffs in parts and is a very catchy track and 'Exterminatus', which grabs the listener with Bolt Thrower-like riff rolls and groovy melodies. 'Daemonculaba' (a rather strange title) is in my eyes the most unique track of the album, which has quite gripping melody arcs and riffs, which also again very strongly remind of the mentioned influences (especially in "...for Victory" times). The only song that offers me personally a little less, because it is slow and somewhat monotonous, is 'Blightmarch'. Here a little more variety would have made sense.

The only question I have now is why the band has adopted such strange, sometimes somewhat silly pseudonyms like Herr Brummbär (vocals), Sarin Spreizer (guitar) or Wutender Ente (bass). The other two are not better. If one already takes German terms, one should take at least suitable and/or correctly written ones.

Remains the conclusion. All who like bands like Darkened, Just Before Dawn or Memoriam and longingly sob after the old Bolt Thrower times, should open their ears and listen to it despite the strange cover, which does not necessarily invite buying it. Who knows, maybe it is more convincing than the new Memoriam?