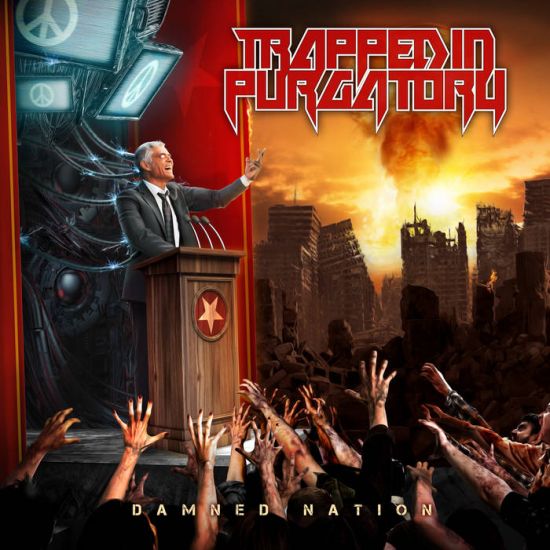 Buy on: Bandcamp
Type: Full-Length
Release Date: January 29th, 2021
Label: Independent
Genre: Thrash
1 Prelude To war
2 Hung out To die
3 Spit It out
4 Demonicide
5 Patient Zero
6 Damned Nation
7 Apex Predator
8 Beyond The Rubicon
9 Out Of The Fire (Into The Pit)
10 Ashen Tide

What's that? The quintet on the promo picture looks like 250 years old in total, but after the intro, 'Hung Out to Die' pops out of the boxes with a youthful freshness, as if the gentlemen have just hatched from the egg. Trapped in Purgatory, the name evokes pleasant associations with "Reign in Blood", come from Bristol and write another chapter for the lexicon of British thrash metal. This book does have some tough sections, but Trapped in Purgatory are not ready to add another difficult chapter. Instead, they have a lot to offer that will make an aging thrash metal fan forget his age-related infirmities for 41 minutes. Well, almost.

The first detail that stands out from the already good first impression is Chris Neighbour's voice. The boy has a terrific vocal volume, hits every note perfectly and adds a spicy touch to the songs. To top it all off, he doesn't sound like legions of other thrash singers. No question, the guy is an ace up the band's sleeve, whose clearly understandable vocals are comprehensible even for non-native speakers. The female vocals in 'Beyond the Rubicon' ring out somewhat less convincing, although they are not bad at all. In any case, Trapped in Purgatory manage to serve up a surprising element, while their form of thrash is otherwise quite typically British, but on a very good level. Friends of Xentrix and Onslaught, in relation to their last albums, will be happy about a stylistically comparable debut.

If you study the band thoroughly, you will see that the colleagues have been in the business for a long time and got stuck in the starting block at the end of the eighties with a first attempt under the name Purgatory. That's a pity, because maybe a lot of good music was never written because of that. But now a lot is being made up for. 'Patient Zero' serves as a perfect example of a crunchy thrasher with a strong melody and a chorus reinforced by background shouts. The following title track is of similar construction and also sprays threatening vibrations.

But it doesn't really lead to the goal of highlighting individual songs. Despite minimally weaker songs like 'Spit it Out', Damned Nation works as a whole because of its balance, its homogeneity and its conclusive nature. Obviously, there will be some smart alecks again who will denounce a lack of innovation and revolution. But honestly, shove your stupid innovation up your asses. The deeper, the better. If someone doesn't realise that old school thrash, like here with a contemporary, neither scraggly nor sterile production, always brings fresh impulses, one can only feel sorry for them. So what are you waiting for? Intro and outro are dispensable, but the eight tracks in between make the hearts of all thrashers beat faster. Go, go, don't feign tiredness. Trapped in Purgatory will wake everyone up.