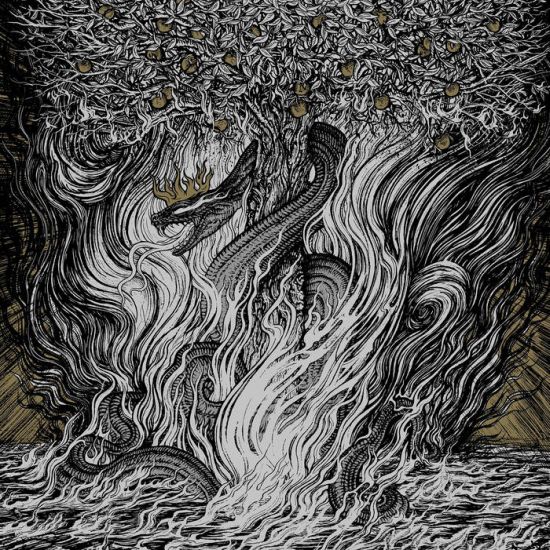 Even slow-thinking people like me realized the greatness of Deus Mortem quickly, at the latest with the release of Emanations of the Black Light. The band has a lot of competences, but writing lukewarm music is not among them. Up to now, I have enjoyed each and every song of the horde – maybe my attitude borders on fanboyism, but as much as I regret it, I did not start to listen to metal because I hated it so much. Quite the opposite; and still I feel that truly great art is released from time to time. By the way, fantastic new music is the best medicine against nostalgic visions. No doubt, 1985 and 1986 were probably the most important years with regard to the evolution of my exquisite music taste, but I don’t want to live in the past and ignore everything that came afterwards.

So let’s draw the curtain for The Fiery Blood. Four songs, 20 minutes. Good news for all those who love to hate the Polish formation: the songs sound slightly blurred. This is no production that fulfils the highest demands in terms of transparency, clarity and brutality. Nevertheless, to me the vehement, slightly blurred and viscid mix matches the musical offering very well. There is a beast that dwells somewhere in the compositions of the quartet (or, more precise, of guitarist and singer Necrosodom) and it comes to life through this sound. What distinguishes Deus Mortem from other, stylistically comparable bands? Difficult to explain, I don’t think the band creates something completely unique. But the dudes always find the almost perfect balance between total fury, stubborn misanthropy, sinister leads and morbid elements. Not to mention the gruesome melody fragments that stand in the foreground during the instrumental parts. Speaking of melodic elements, the ambient beginning of 'Down the Scorched Paradise' is fascinating right from the outset. It kicks off the opener that turns into a wave of violent hammering. Deus Mortem try to explore the limits of uttermost grimness, but fortunately there is no end in sight. It’s great to experience that the group hasn’t modified its style. To change the best can only be wrong – and with this finding in mind, Deus Mortem celebrates more feasts of demolition. Broad parts of 'Breaking the Sceptres, Crushing the Wands' lead directly to the boiling point of negative intensity and the same applies for 'Nod', the first track of the band with Polish lyrics. It explodes after a calm beginning and it slows down at the end, but it presents ravaging guitar sounds and mostly high-speed rhythms in between.

However, these masters of Eastern black metal also manage songs that do not focus on total destruction. 'Lord of All Graves' develops its sulphurous aroma by slow-moving guitar lines, morbid tones and unholy vocals. "Sitra Ahra shines through death and the realms diffuse” – this lyrical fragment mirrors the aura of the track perfectly. There can be no doubt that all spiritual forces of impurity have been involved in the creation of this piece. Take one of the slowly creeping Marduk songs, add a massive dose of devastation and decay and you know how 'Lord of All Graves' sounds. So what more can we demand? All songs prove evidence of the band’s fanaticism, dedication and (most important) song-writing skills. Deus Mortem give me the good feeling they will never wimp out, soften or disappoint in any other way. Additionally, the digipak EP is adequately designed with readable song lyrics and atmospheric band pics. Given this situation, my recommendation is clear. Deus Mortem deserve support. Even people who think slower than I do (does this species exist? Let me think about it…) should be intelligent enough to realize this fact.