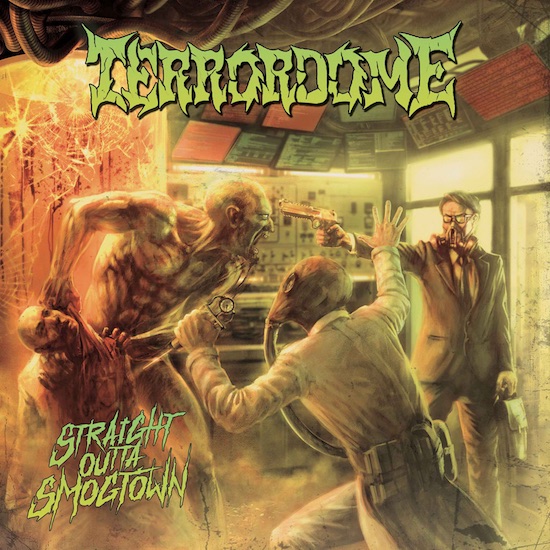 Terrordome from Poland do not suffer from a lack of self-consciousness. Given this fact, they feel free to offer an album with 14 tracks and a playtime of more than 40 minutes. Okay, this is no bombastic configuration, but we have to take into account the style they play. Imagine Dr. Living Dead! without their occasional suicidal tendencies, add 5% of units such as Mucinipal Waste and you should have a pretty exact picture of the quartet from East Europe. Right from the beginning, the protagonists create a lot of pressure due to their overflowing energy. Sometimes it happens that the dudes cannot control their hyperactivity. As a result, a few parts of the album are very fast and wild, but they do not leave a long-lasting aroma. 'Your Personal Comfort Versus The Global Disaster' is one of the best titles I have ever heard, because it describes the secret dilemma of a young climate activist in a very precise way. Unfortunately, the song itself cannot keep the quality level of its title.

Of course, although Terrordome are not very interested in Mike Muir’s music, they have an affinity for some hardcore vibes. The straight and direct 'Into The Void' is an example of pure aggression. Yet I admit that I prefer the marginally more complex tracks like the slightly menacing yet still unbridled 'Money Kills'. This excellent acoustic cluster bomb delivers devastation with class and it is not the only song that deserves this description. I don't know exactly what Brazil and Poland have in common except, of course, that they met in the third-place match of the 1974 World Cup, but 'Desordem E Regresso' (one more brilliant name) marks another great outbreak of youthful anger, among other things due to its catchy chorus. But maybe it does not make much sense to highlight single tracks. Why? Well, I haven’t spoken about the first songs of the album and all of them are pure sonic adrenaline, too. Enjoy the flattening double bass of the extremely massive 'Worried Again' whose chorus also knows how to devastate. Or take 'Possessed By Blyat'. It throws you into an imaginary mosh pit as well and its first line (“1986, the time I was born”) builds a probably unintended bridge to one of their best previously released songs, the fantastic “Back to the ‘80s”.

It feels good to experience that Terrordome try to ignite a conflagration and they are mostly successful in doing so. The straight in your face production supports the musical approach excellently. I really do not know which kind of sound could be more appropriate for this type of thrash. So for me there is no doubt that Terrordome give the scene weighty impulses in view of their staggering velocity, their instinct for memorable parts and their authentic attitude. Probably we are brothers in spirit, because I was also born in 1986... What do you say? I was already born in 1968? Oh my God, didn’t know you’re such a picky grinch. But believe me, 'I Don't Care' - and this is nothing less than the title of another mind-blowing highlight of Straight Outta Smogtown.