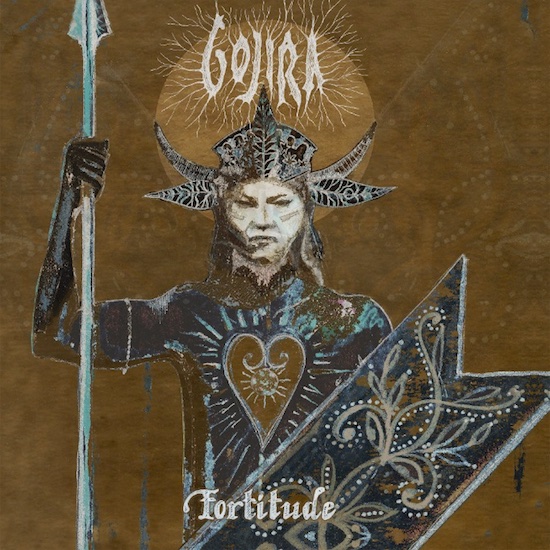 Let me start by saying that I know this is a controversial title, but I’ll explain what I mean. First, let’s talk about the band. This is going to be quick, because I feel like everybody knows Gojira. They have had the same line up since 1996, back when they were called Godzilla, consisting of the Duplantier brothers (Jo on guitar and vocals and Mario on drums), Jean-Michel on bass and Christian on guitar. Their sound has always been quite unique, mixing progressive metal, death and groove metal. But trying to describe their sound only using genres is kind of impossible. Basically, when you hear Gojira, you know it’s them!

Fortitude is their 7th studio album and probably the best of their career. Everything is flawless, from the music itself, the song writing, the musicianship and add to that the lyrics, the production and the cover art. Even the music videos are incredible! That said, it’s still not my personal favorite: nothing will beat L’enfant Sauvage and From Mars To Sirius. These albums are more than perfect to me.

So, let’s get into it. Gojira has always evolved but managed to keep a core sound consistent. On Magma, the previous album, they went even further with experimentation, almost abandoning death metal completely, introducing a lot fewer heavy sounds with more clean vocals, less double bass drum, shorter songs, more focus on atmosphere and simpler grooves. On Fortitude, they continue to venture in their more accessible sounding side but at the same, they revisit their heavy roots quite often. That’s the beauty of Fortitude: it’s a lot of ideas, mixing both the heavy and accessible but in such a cohesive way. I would compare this to Opeth; not that it sounds like Opeth, but the way they mix the super heavy and the quiet, more melodic parts all done seamlessly in the same song.

The album opener, 'Born For One Thing', has a really great drum roll build up which gives even more weight to the first riffs and vocals. Then the super heavy riff hits and you’re like: “Wait, is this From Mars To Sirius?” On the chorus, they take their foot off the heavy pedal a bit and give something much more atmospheric and melodic, but the end is a breakdown mixed with pinched harmonics in the background, which is just genius! Other heavy standouts are 'Sphinx', 'Grind' and 'Into The Storm'. The vocals on 'Sphinx' stand out: Jo does some deep, low growls. If you’re a fan of death metal Gojira, you’ll be happy to hear that. Accompanying these vocals is a heavy bouncing riff. It was made for headbanging! I can just imagine this song in a live setting, the crowd would go wild. Actually, I think the whole album was written with live performances in mind because every single song would be perfect live, except maybe 'Fortitude', the quiet, mostly instrumental interlude that is basically the intro to 'The Chant'. 'The Chant' is quite unique in Gojira’s discography. The main melody is just what the name says: a chant. Jo’s clean vocals really shine on the whole album. I don’t know if he took singing lessons or what, but all I have to say is wow! The trails also have standout clean vocals.

So, we already established that the vocals are good and what about the instruments? Guitars are 100% Gojira, crushingly heavy, groovy riffs, pinch harmonics and, as a long-time fan, I was so happy to hear the famous Gojira slide back after not being present on Magma. We also have maybe a first for Gojira: a proper, bluesy solo on 'The Chant'. Not going to lie, it’s a bit weird for them, but you quickly get used to it and I quite like it now. The rhythmic section is also absolutely insane. You can hear Jean-Michel’s bass so clearly on every track adding heaviness to every riff. And more than adding just an overall heavy sound, it adds a lot of groove and there are even some funky bass lines sometimes. Finally, the star, the one and only Mario on drums. What to say about Mario that has not been said? He is one of the best drummers on the planet right now. His playing is so unique, you could give the same drum beat to another drummer and it would not sound exactly the same. I don’t know what it is, maybe the way he hits every note with such force and at the same time such finesse and precision. He does such amazingly technical fills and yet it seems so natural and easy for him. There are so many memorable drum moments. One in particular is on the track 'Into The Storm'. The beginning is a muted double pedal bass drum beat with Mario playing what I think is a cow bell. The whole thing sounds like a railway crossing. Truly unique and creative.

Lyrics are traditional Gojira: writing about spiritualism, nature and what humans are doing to the planet. The beautiful 'Born For One Thing' is basically talking about death and how it is one of the things that unites us all: We were born for one thing. tame the greatest fear of all. We were born for one thing. born to face the greatest fear of all, we’re no one United When we're gone”. They are sometimes more direct like on 'Amazonia':” There’s fire in the sky; You’re in the Amazon; The greatest miracle; Is burning to the ground”. They always offer beautiful and thought-provoking lines:” How can we be so blind?; Our light is torn; How can we be so lame?; No truth being told”. Moreover, the album was mixed by Andy Wallace, the legend who worked with many many artists: Sepultura, Nirvana, Rush, Alice Cooper, Dream Theater and so much more. It makes for an incredibly clean and precise sounding album, where you can hear every instrument clearly in the mix. They added a lot of little things like a jaw harp, flutes and a tambourine, to name a few. Add on top of that a beautiful cover art done by Jo himself and impactful music videos that fit the music perfectly and you’ve got an impressive and complete piece of art!

So how else to conclude this review than by saying it’s the best album Gojira has ever made? It’s only logical. More seriously, though, I think this album will be more well received than Magma was. I feel that long-time fans will find more of Gojira’s older, heavier, more familiar sound, but at the same time they continue to expand their sound into more melodic and accessible territories, bringing in more and more of the guy’s diverse musical tastes. A definite album of the year contender!