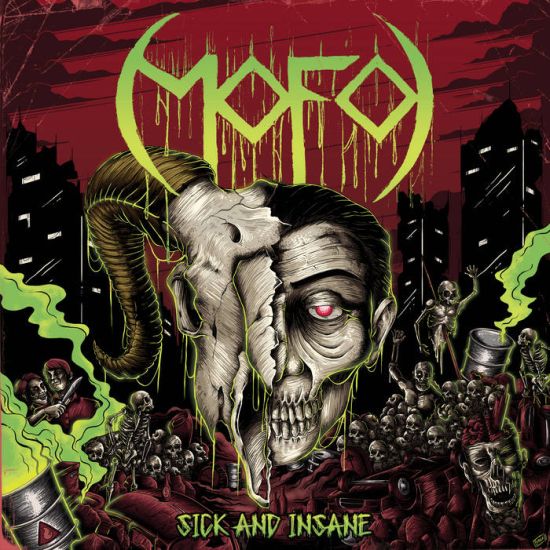 Brazilian thrash is almost a quality assurance mark. The first wave of bands is absolutely fucking legendary -old Sepultura is as good as Slayer or Sodom- and the whole thrash revival thing was fueled worldwide by the success Violator had back in the mid 2000’s. Formed in 2010, Mofo is part of that same wave of bands (even if this album was released in 2020). Heavily influenced by punk rock, Emiliano's vocals do resemble Poney Ret’s indeed. Their proposal is based on fast tupa-tupa beats that decorate the mean riffing inspired by Vio-Lence, musically it doesn’t really bring anything new to the table but it does take you back to the 80’s, which is perfectly fine by me.

The soloing is prodigious, technically superior to 90% of the bands playing this style; pretty impressive, it reminded me a lot of Andreas Kisser's work. There’s an acoustic intro included too. Mid paced breaks are recursively called to give rhythmic variation and make composition more dynamic, well cooked and heavy stuff. The beginning of track 5, 'Sick and Insane', consists of a slap bass / drum fill section that is almost a copy paste from the same idea on Havok's "Conformicide". I get the bassist is very technical too and they wanted to show him off but the lack of originality kind of hurt the track this time.

There's another bass solo on track 3, 'Brothers of Death', better coined though. The bass is not as present on the mix as I would have wanted but at least is listenable when needed. Drumming is ultra tight, fast parts are violent and the fills are rich in groove. Latino percussionists are the best in the world. The recording quality of the master tracks is top notch and the digitized mix is naturally crystal clear but not over polished. The physical compact disc is also very professional and properly fabricated, not homemade. I recommend this to any thrash maniac around the globe!

A short guitar intro invites the listener to lean back comfortably on the sofa at home. But the gloating laughter and the whirring noise (reminds me somehow of X-Files, when the aliens appear) foreshadows ominous things from the Brazilians Mofo. And - bingo - with the first song 'Adrenaline' it starts. A cool Slayer worship riff and you're already interested in what happens next. The band combines old school thrash with varied melodies and pretty wacky guitar solos. It can go on like this. The tempo is not kept in the next songs so on continuous acceleration, but that does not harm the songs, because as I said, Mofo manage to keep the listener by very varied songwriting on Sick And Insane. You can definitely recognize the band's musical influences (as already mentioned, quite obviously Slayer, but also Megadeth, old Vicious Rumors and newer bands like Warbringer might be sources of inspiration for the guys), but this is definitely not a "copy and paste" release.

On 'Time for War' the former German Reich Minister of Propaganda Goebbels, is allowed to get a few words off his chest (my friend Felix already said a few words about this in his review), but I assume that the band and every listener who is not fluent in German knows what kind of fanatical bullshit this guy is spouting. 'Sick and Insane' is a pretty crass song, which drifts in parts of the vocals and the melody leadership already in death metal realms and also again clear Slayer influences can be recognized. 'Frank' (I refrain from any comment about people named Frank here...) is a song that slowly builds up its tension by increasing the tempo more and more. In addition, in the middle section is a guitar solo that is quite leaned on classical compositions, quite an interesting song that is well worth listening to (sorry Felix)!!! The last track 'Hate and Disgrace' is quite a neckbreaker, which like the opener again breaks through in fast tempo and makes the conclusion of the album quite worthy.

Production-wise there is not much to criticize in my eyes. You can hear all the instruments loud and clear, also the vocals sound powerful and aggressive. Perhaps the production is a touch too dull, but that is sound on a high level. Are there any other points of criticism? Quite, because in my humble opinion the drums are sometimes played a bit too hectic and choppy and also the breaks sometimes still seem a bit too little thought out. But as the debut album of a young newcomer band, you can definitely take your hat off.

I don't know if Mofo from Brazil are familiar with Germany's current politicians, but if the quartet wanted to dedicate their debut to them, then Sick and Insane would be an apt name. But even if that's not the case, the title fits the music well. Mofo do not deny their origin. Their music resonates with the typical cruelty of South American thrash bands. Decimator and Violator, as we know, both also from the 212 million country, transport this cutting unbridledness as well. Sure, that feature alone does not make an excellent record. But the lumberjack mentality definitely gives the album a good basic direction.

Fortunately, Mofo actually have other aces up their sleeves. The old school Slayer riffing, very noticeable at the beginning of 'Final Experiment', shapes songs like the strong and rabid 'Brothers of Death' into little diamonds. Without a doubt, Mofo are a band where the typical thrash elements set the tone. But there are also small experiments. The beginning of the title track offers funky tones (but only briefly, don’t get suicidal thoughts), the guitar in an instrumental part of 'Let Them Fall' sounds like an underwater recording and excerpts from a speech in the 'Berliner Sportpalast' of a not entirely unknown former propaganda minister appear in 'Time for War'. Mofo try to represent their genre wholeheartedly without forgetting a note of their own. This succeeds well, especially in the first half of the album. The raw but clear production also contributes to this, endowing the pieces with the necessary portion of aggressiveness and directness.

What can the Brazilian foursome still work on? So far not every riff fits, sometimes you can hear a good amount of vehemence, but a bit too little coherent leads and one or the other song could have been tightened up. These points of criticism are not dealbreakers, showstoppers or album-ruiners, not by far. Nevertheless, it has to be said that especially on 'Frank' a few good sequences get lost in the expressionless sections that dominate here. (But it could also be that I'm biased with this title, because the worst boss I ever had was called Frank, too. A real moron, avoid him!). But even 'Purgatory' can't completely erase the impression that the guys run out of ideas to some extent at the end. It is one of those pieces that actually captures and reflects the aesthetics of thrash all along the line, but still doesn't really detonate.

So Mofo are not unhinging the thrash world and I am probably more affine to European thrash. But the Brazilians have fighting spirit, integrity and energy. The singer doesn't spare the vocal cords with his powerful roar and the guitar, bass and drums will also have been happy when they knew they survived the recording session. Finally, the amigos manage a robust closer. 'Hate and Disgrace' is a final punch in the face and it's good chorus makes it clear that Mofo should write catchy passages more often. But I don't want to end with such bagatelles, because underneath it all, Mofo have put out an energetic, good thrash album. And I’m sure there is potential for more good music.