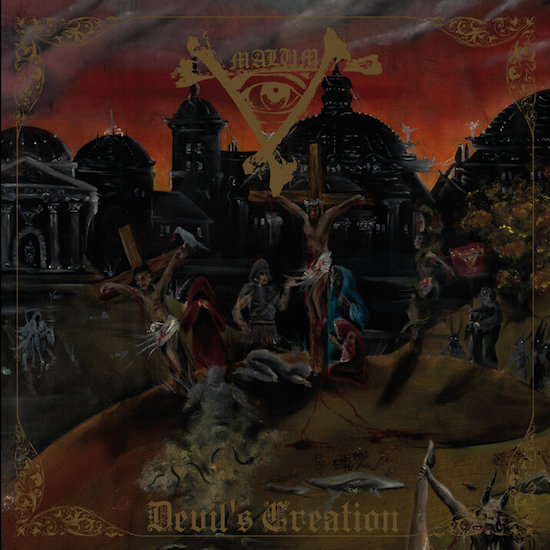 Eternally burning or ever-fertile are just a few examples to describe the Finnish black metal scene whose belligerence never runs out of breath. Of course, it is not enough to have an identity card of this country for being able to perform devilish music of high quality. Nevertheless, there are myriads of great bands that originate from this part of Scandinavia. One of them is, surprise, surprise, Malum. It took them less than two years to return with a successor for the strong Legion from 2019. Maybe due to this relatively short period, the black battalion did not modify its style significantly. One gets nearly 39 minutes of pure, Nordic black metal. Its vibes don’t differ from typical Finnish back metal which is presented by formations like Horna, Behexen or Sargeist. This does not mean that Malum copy the approach of one of the role models. They just transport the feelings that make sinister music to black metal. The voice plays an important part in this context. The lead vocalist expresses cold hatred and his dogged nagging gives the tracks an extra portion of evil. Naturally it makes no sense to hope for (or fear?) a very diverse performance, but the guy is doubtlessly good in what he is doing.

By the way, this statement applies for the instrumentalists as well. Forgive me my weakness for infantile poetry, but these Finns convince! The six compositions are well balanced between atmosphere and ferocity; no question, the broad, evil melody lines as well as the devastating frontal assaults leave their mark impressively. Supporting keyboards let the cold Northern winds blow, but they never dominate the sound. Of course I am speaking of the typical Finnish black metal sound that deserves attributes like harsh, compressed and repulsive to mainstream music consumers. But the main trademark of the dudes is their skill to write songs with non-conventional structures without drifting into this incomprehensible meaninglessness that self-declared metal-academics (read: idiots) love to describe euphemistically with the term “progressive”. Instead, Malum find a way to avoid verse-chorus-verse schemes, but their compositions do not lack coherence in any way. This approach results in real genre gems like the title track. It reveals (once again) that true black metal has a fine instinct for fantastic melodies that get even bigger in combination with the predatory aggression of fierce misanthropy. The following 'The Curse' is also good, but it does not stand on an equal footing with remaining pieces due to its comparatively dignified and slow harmonies.

But I don’t intend to go too deep into details. Devil’s Creation gives the listener what he expects in terms of style and maybe more than he expects in terms of quality. Honestly speaking, I am sure that every black metal fan who does not get hooked on songs like 'Dead But Breeding' has definitely missed his own funeral. But that’s not my problem and, better still, I don’t have any problems with the new work of Malum. Five out of six songs let the flames of black metal blaze tower high. Given this situation, Devil’s Creation catapults the Scandinavians on the next level. Its melody lines convey a lot of emotions from hostile to triumphant, the authenticity and integrity of the artists are beyond doubt and at the latest the fact that they are anything but lazy makes the insatiable supporters of the scene more than happy. I know it for sure, because I am one of them.