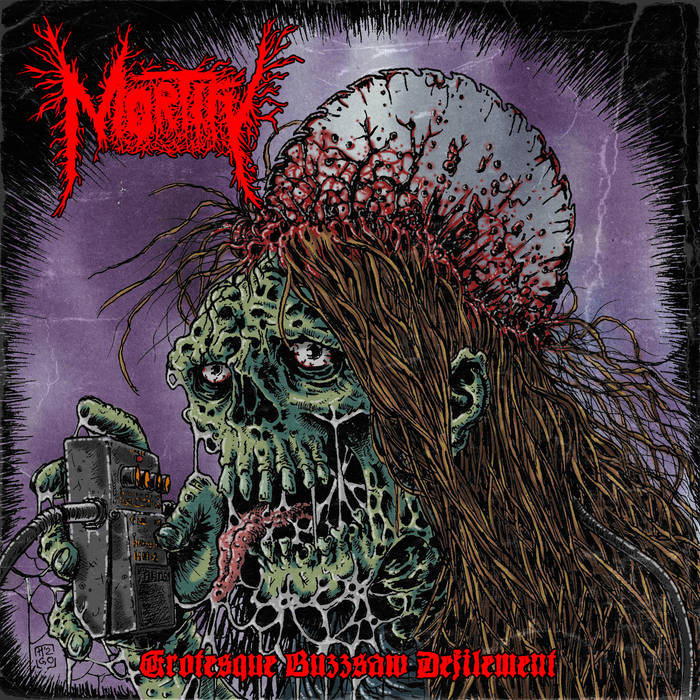 Your body is reduced to ground meat after put through the grinding mill that is Mortify. Nine minutes and thirty five seconds of blender gore fury that would make you wish there was more meat to fill your appetite. If these guys decided to add a bit more to their music in terms of length and even go a bit further into death metal territory then the next releases to come from them would be among the major league of the under guts of the sub-genre.

The artwork alone is enough to make you pick up the album.

The indiscernible Tasmanian-esque rasps combined with growls uttered deep within the stomach create an animalistic mask for the music, meanwhile, the drumming (though very programmed sounding) adds a gutsy and brutal layer to the bits and pieces you’ll hear on the album that extends into brutal death metal. 'Flesh Creep', 'Obelisk Of Suffering', and 'Brain Gurgler' are just a few of them that bring the punishment to the sonic formant with a violent overcast both vocally and instrumentally. And speaking of instrumentation on Grotesque Buzzsaw Defilement, there are riffs and thrashing/death metal pieces scattered that would make you wonder what Mortify could accomplish had the album been about 25 minutes.

Very promising guitar sections such as on aforementioned 'Obelisk Of Suffering' and later chunks such as 'Grabby Hands' and 'Mangy Mutts'. There's no questioning if the lads can play, it's obvious the technical proficiency is there and the savviness of how to put it all together is also present. The mechanical sound of the drums would either be a good or bad thing depending on your preference, however, this amplifies the already buffed production on the record and even adds to the violent impact Grotesque Buzzsaw Defilement carries.

This is one to snag without second thoughts and I'd even pick it up on vinyl. Would be great to see Mortify transformed to a more dedicated death/grindcore band provided how well they handled themselves on their first album Grotesque Buzzsaw Defilement.