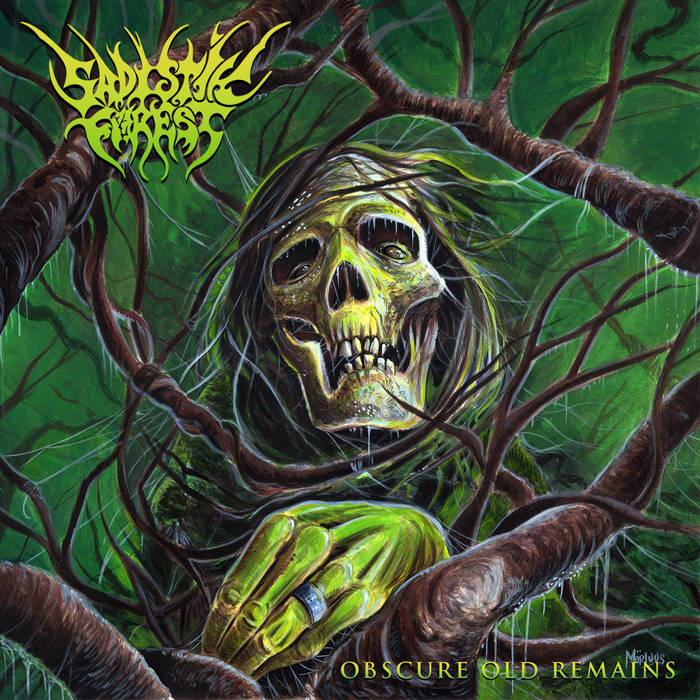 Sadistik Forest's 2018 album Morbid Majesties was good; nothing groundbreaking, just death metal that resembled what was coming out during the mid to late 90s. However, the production on that album was sort of clean, kind of like the sound quality a modern death metal album would have. I might be wrong about the modern death metal reference but I do recall the sound being quite clear. However; with this follow-up EP titled Obscure Old Remains, we get to see a side of Sadistik Forest that may be reaching out for a primal and gritty sound. Not just that, it also seems as if the band, though being of Finish descent, has adopted an admiration for the Danish death metal scene as some pages seem to be ripped out of the Undergang sewer manual.

The building blocks of death metal are still present within Sadistik Forest's structure but there do seem to be a slowly invading factor; a somewhat new face being added to their sound on this EP and that’s the d-beat that I don’t quite remember being used on the past release (I might be wrong).

With the production taking on an unpolished sound, Sadistik Forest's music on Obscure Old Remains does seem appropriate as far as the album title goes. And as we are on the album title I also get the feeling that the songs featured on this EP may not be new; rather, old recordings that never made it to physical media. Just a thought.

As for the music on Obscure Old Remains, I find it somewhat in contrast to what they had put out in 2018 both in terms of aforementioned production value and structure. While their past album conveyed a modern sound to the listener, this EP seems more rooted in the underground in which you’d encounter this new upheaval of OSDM bands. That’s a good thing the way I perceive it and hope Sadistik Forest continues down this path to audial primitivism.

As for the music, I also prefer what I hear on Obscure Old Remains in comparison to Morbid Majesties. The record sounds alive, more engaging, and sincere. Very organic and to the bone as should be the case with death metal.

And if I had to pick a favorite I'd have to go with 'Waters Black' as a result of its broad and flexible rhythms. Other songs such as 'Barbarian' and 'Mandragore' pull off thrashing stomps combined with uninterrupted pace shifting, and as I mentioned, the addition of the d-beat stomp that amps up the EP's diversity. If Sadistik Forest applies this formula to future releases we could be hearing their names mentioned alongside the more prominent within the underground.