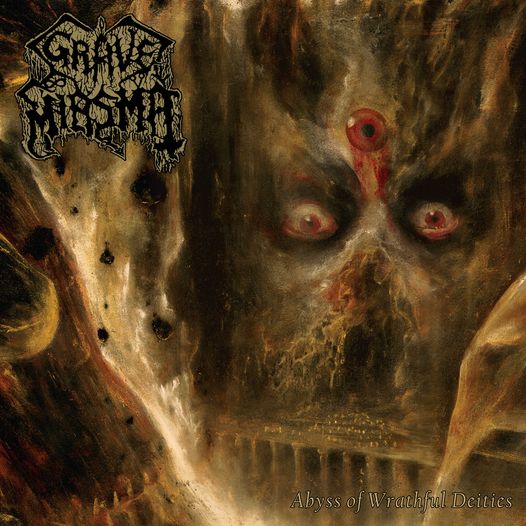 Not a lot of people talk about UK death metal beyond the obvious and emblematic Bolt Thrower, but in their underground there’s cult act Grave Miasma who for almost two decades have released a steady slew of sonic abominations that have enshrined them in the underground. In 2021 they come back with their LONG overdue sophomore release Abyss Of Wrathful Deities, to be released through Sepulchral Voice and Dark Descent Records for the EU and the US, respectively.

First thing first, Grave Miasma’s particular sound can best be described as death metal with elements of black metal and some assorted influences ranging from thrash to even Indian music. That latter element was prevalent in their superb 2016 EP Endless Pilgrimage, and that EP is relevant for this new LP since the band have continued in that style and developed it even further. The previous GM releases featured a very dissonant, very blasphemous and filthy style of death metal, where they overwhelmed your senses with pure sonic unholiness, but now, the band’s sound (while no less ferocious and overwhelming) is a much more clear sounding, but also much more ritualistic trait. The band is still incorporating Eastern influences which include a sitar and an oud, and have expanded that influence onto their solos and overall atmosphere. The dominant instruments are still dual guitars, which are enhanced by the echoing and intense vocals, and the band is able to seamlessly switch from speed to a mid-pace, while also flexing some excellent riffing. There's even some tastefully performed riffage where the band truly display that thrash influence that was somewhat superseded in previous efforts.

The obvious improvement in sound quality and polish is what helped the band in fully realizing the sound they’ve been slowly but surely developing over the years. Jaime Gomez Arellano, from Orgone Studios, rose to the occasion to make this record sound as good as it needed to be, and without betraying the band’s underground roots. Furthermore, given this record, according to the band, delves deep into exploring various spiritual aspects of death, it was only natural that the band would want their music to viscerally display this, and indeed, the album manages to have an overwhelmingly oppressive atmosphere. Without discarding their utter ferocity, they accomplish this with their performances and as a unit the band simultaneously succeed in having the mandatory speed and primitive strength any death metal band should have and also the ritualistic atmosphere. Neither of those elements cancel or is above the other and the end result is a unique album that’s both dynamic and versatile, while also very straightforward and without filler or needless self-indulgence.

Overall, Grave Miasma made good use of the 5 years it took them to release new music and there’s very little to complain about here, as this is a quality death metal album that pushes the genre’s extremity into a bold and mystical direction.