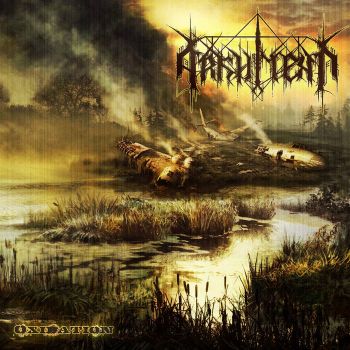 It's easy for normal people. Play them ten seconds of whatever and they will instantly know whether they like it or not. Ask them to recommend something to you, they will play you ten seconds of whatever else, and expect you to agree. But when you ask "why" they will struggle to give you an intelligent answer. Or, any answer, especially if you expect one related to music itself. It's probably the same if you ask them why they hate something. They will know within ten seconds.

On the other side, what we have here is 65 minutes of something, and after those 65 minutes even a seasoned reviewer will still not know, but for a radically different reason. Because it asks questions. And makes you wonder. So. 65 minutes of slow, scorching drone guitar, random screams and equally slow drums - if you can call them that. They are definitely drums, but more as if someone randomly hits parts of the drum kit, possibly with only one drum stick. It turns out that they were programmed, but you'd never neither guess nor care to. There's not much free time between the hits for constructive thinking because when they hit, they hurt. And it's somewhere between the Chinese water torture and a "hell yeah".

Now the questions. Is this planned, or is it a nihilistic stream of consciousness? The subconscious says that it is planned, but the reason says that any planned parts are few and far in-between. Oxidation could be a work of people who, first, learned how to master things, only to, knowingly and systematically, de-construct them later. Or it could be a couple of retards on a lucky day, doing what they are comfortable with. The sound is clean enough to be professional, yet dirty enough to be a work of a bedroom amateur. Who knows.

The guitar is, mostly, retarded - if you thought bedroom DSBM guitars are retarded, you haven't heard Arkhitekt. Yet, after a while, you don't care. It's just some chords, and it's more about their presence contributing to the atmosphere slowly sucking you in and making you lose hope than about playing actual music. Occasionally there will be a lick or a repeating pattern - not a good one, mind you - but perceivable enough to make you realize the guy actually made an effort. Oh, sweet nothing.

There is an occasional keyboard intro or outro, and the Striborg fan in you will rejoice. The same guy also does the vocals, and the screams are probably the one ingredient that makes all this work. Or, maybe it's the pathetic excuse for drums that still makes you sit and listen to each and every beat. Because you don't really need more than that, whatever it is. Progressive retardation or constructive degradation.

So, there it is. A reviewer both knows and doesn't know. But, it's an hour later. Not ten seconds later.