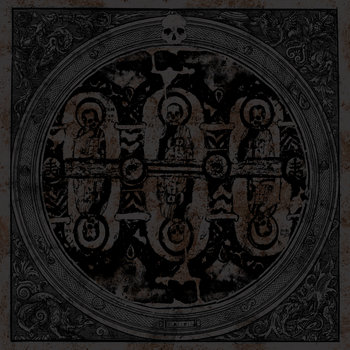 I am seeking for The Stone's full-length from the year 2007 ("Неке Ране Крваре Вечно") for several months, but every mail order fails to deliver this seemingly attractive album. Fortunately, the world is full of placebos, just think of rubber dolls or tofu sausages. Therefore, I decided to buy this split 7" in order to relieve the pain. And even if I am not familiar with inflatable sex partners or vegetarian hot dogs, I dare to say that this vinyl is a good substitute for the untraceable album.

The guys from the Serbian underground present a coherent number with an erratic main riff and mighty breaks that do not damage its flow. 'Antiutopija' heralds the ideology of honest black metal in a mid-harsh manner. Its clearly defined sound is perhaps a problem for some oh so trve pvrists who sit in their children's room and play computer games, but everybody else will enjoy the high pressure of the mix. It contributes to the fact that the lively track is constantly in motion. As a result, the guys avoid any kind of boring sequences successfully. If this double bass driven piece indicates the average strength of their compositions, I have to take a deep dive into the discography of The Stone.

I do not really know the full-lengths of Isvind that they have released since their comeback, but their early works did not fully convince me. Nevertheless, their song for this Norwegian-Serbian collaboration stands up to the critical scrutiny of sceptical guys like me. Its almost hypnotizing guitars contrast with the rumbling drums and the malicious vocals, before the cleverly designed piece attacks in a more furious way. Without stylistic experiments and in accordance with The Stone, the Scandinavians respect the tried and tested agenda of black metal. The tempo changes are not an end in itself, they create a gripping flow. Only the brief solo confuses me a little bit, but it also does not hurt the quality of 'Opplagt Krass'.

The collaboration makes sense in view of the very similar approach of both bands. I cannot identify significant differences in terms of anger, complexity and atmosphere. Norway and Serbia march shoulder to shoulder and, to cap it all, both songs also benefit from a suitable production. Thus, this split unites the motherland of the second wave with a still underdeveloped country in a successful manner. With that said, I keep on looking for "Неке Ране Крваре Вечно".