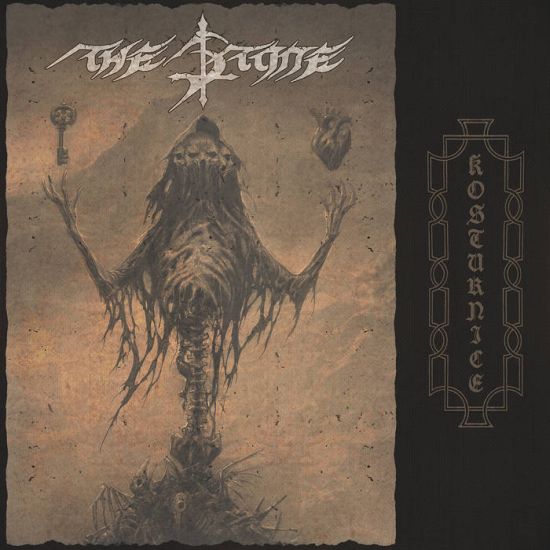 Serbia’s flagship in terms of black metal, The Stone, welcomes us to the ossuary (Kosturnice). First of all, it’s good to know that the band keeps the spirit alive. As far as I can see, the music of the dudes from Belgrade was not always outstanding, but it never tried to add useless ingredients to the genre. The dudes always offered pure black metal. Slightly difficult were the song structures so far. They could not be blamed for being labyrinthine, but sometimes they were difficult to decode for guys with only limited time. An opaque density characterized the single tunes, for better or for worse. By contrast, Kosturnice is an amazing album, because it shows more facets, although all songs form a homogeneous unity. In addition, the record does not break with the song-writing tradition of the band, but it also surprises with compositional designs that make it easier for the listener to get into the songs. Simply speaking, the guitar work is just better than before, the riffs are more effective and overly ambitious twists and turns were dropped during the recording sessions.

'Okamenjen', for example, offers raging drums and the well-known inhospitable atmosphere, but it also manages to score with a guitar riff that takes the listener by the (probably dirty) collar right from the beginning. Glad, the new guy behind the microphone, supports the aforementioned mood excellently in view of his dark, voluminous and commanding voice. Yet his predecessor also made a good job and so I come back to the more coherent guitar work. This is the element that makes the small but fine difference. It seems to me that mastermind and guitarist Kozeljnik has reached a new creative peak while working on the songs for Kosturnice. The title track with its spooky guitars at the beginning and the following, typical The Stone drive, seems to confirm my presumption. Because - this is also part of the truth - the sound of the record sounds robust and dense, quite transparent but also gloomy. In other words: the production does not offer new facets, it’s the sound we know (and appreciate) when it comes to an album from the Serbs.

The closer starts relatively mild, but don’t jump to conclusions. It gains more intensity and apart from this, it cannot hide the fact that it was penned by an experienced songwriter. And so comes an album filled to the brim with good or even very good songs to its end… but I cannot close this review without having spoken about two further tracks. 'Ime Koje Su Razvejali Vetrovi' is a strong mix of straight, fast parts and slightly softer breaks. A good piece, but it fights a losing battle against its direct successor. 'Engulfed By The Abyss' marks one of the absolute masterpieces in the career of the horde. Galloping riffing, restless drums, an almost fragile lead guitar which is surrounded by a powerful environment – this is a number where everything fits. And it goes without saying that this includes the great guitar melodies during the raging mid-part as well. (I hope my personal guide through the East European metal scenes, Mister N. P., shares my opinion!) Each and every member of the five-piece does an excellent job here, maybe in particular drummer Honza Kapak whose performance almost borders on insanity. It’s fantastic to see that the high number of breaks does not affect the coherent overall picture. Instead, they play their role to shape this highlight – the best track of the best album of The Stone so far.