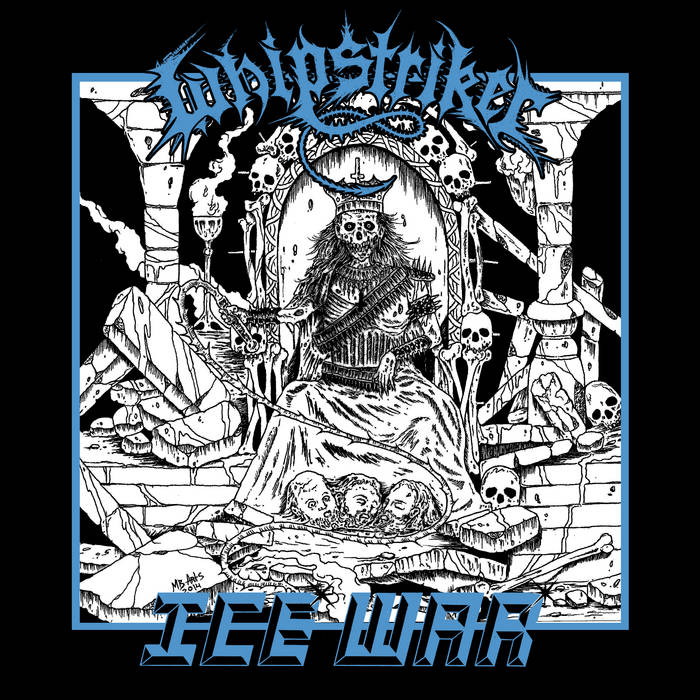 I usually like Whipstriker. The guy who runs this project knows how to get songs succinctly to the point with good riffs. At the same time, the necessary bit of antisocial filth is never missed out. But the good man also has fun pumping up his discography until it bursts. The split with Ice War is release number 37 since 2010. This compositional overproduction is not only an advantage. 'Restless Dogs', for example, is just solid standard stuff in the main part. Aggravating the situation, it is introduced by a lame intro and ended by a crummy fade-out. It doesn't help that the intro was cribbed a bit from Savage Grace ("Lions Roar"), who had chosen "The Ides of March" as their model.

The following two pieces are unfortunately also just more of the same and suffer from the fact that the guitars have nothing extraordinary to offer. Accompanied by dull beats, almost nothing of their (barely existing) melodies sticks. 'Rot In Trench' sounds more catchy than track number three, but won't make it into my private "heavy rotation" either. Nevertheless, the mix once again gives the music a dirty attitude. As a result, this means 65% for our Brazilian buddy.

Ice War follows. Again, there is only one person behind the band name and honestly, I'm not surprised that no one wants to make music with the boy. Less filthy, more inclined to speed metal, Ice War ask for a dance. But already the warped, rather affected singing spoils the fun. An "all-star band" of early Helloween and Atlain would have sounded similar to Ice War on "Grip of Death", but only on a rainy day with autumn depression. The youngest stylistic element of Ice War's compositions must have reached retirement age a long time ago, and unfortunately you notice that and the rancid smell it evokes every second. The breaks don't fit, the riffs are average at best and are also repeated too often. However,the worst is yet to come - the whole thing is far from real heaviness. Although the reference to the eighties is of course nothing bad per se, I like very little here and if anything, then it is the one or other instrumental passage. The last chords, accompanied by long drawn-out "ohoho" shouts, reflect all the poverty of the Ice War pieces on this split. Out of politeness, I'm withholding the percentages for this entry, but if 65% for Whipstriker and X% for Ice War add up to 45%, I guess that says it all. A release for people who like to back the wrong horse.