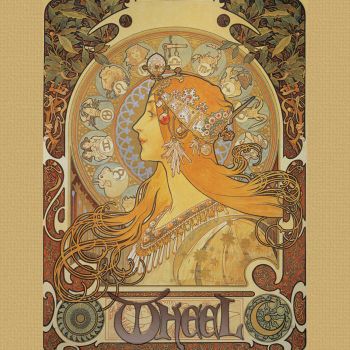 Germany’s Wheel is a relative newcomer to the doom metal scene, even though they had been kicking around since 2006 under the Ethereal Sleep moniker before adopting Wheel. In the sphere of doom metal there usually is no real room for originality or stylistic ascension anymore, but there is good and bad, enticing and dull. So here we have Wheel, whose two-song demo I have before me, and immediately it sounds like Solitude Aeturnus with subdued Geoff Tate vocals, which is quite interesting. Bands like Candlemass, St. Vitus, Sleep and Electic Wizard have a good grasp on the ingredients for good doom metal and Wheel seems to have taken the important elements of these bands and made a pretty impressive demo.

Musically the band is quite good. The first track, 'Lilith', moves like molasses descending from a glass jar, with vocalist Arkadius Kurek’s delivery seemingly pushing along the mass of sounds. Master of Reality-era Sabbath seems not only prevalent here, but necessary for such a fine piece of doom metal. 'Ethereal Sleep' is much the same thick, brooding sounds, but not at all boring. In fact, of most of the doom that crosses my path these days Wheel’s demo is certainly one of the better offerings towards the top of the sizable heap. It’s easy to be boring and repetitive in any genre, especially doom metal, but to be interesting and vital in a genre laden with mediocrity with little room for reinvention is quite a feat to undertake. I think Wheel has the makings to do the scene a service.

As of this writing the band has issued its first full-length titled Wheel and is looking for gigs and possibly for a second guitarist to round out the live sound. Germany has a long line of bands that have marked the metal world with memorable, legendary bands. While I think Wheel has a ways to go before laying legendary status to their name, they’re a good band with creative sparks that keep the flame of doom metal burning nicely.