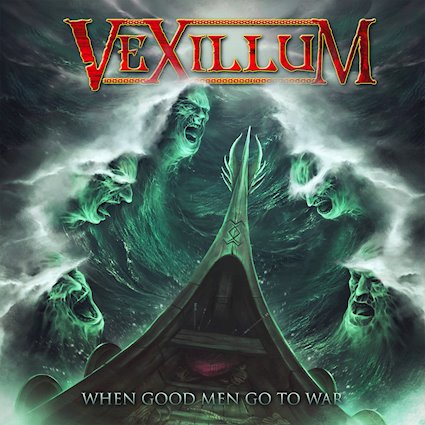 At first glance Vexillum’s pagan makeup may give rise to feelings of Elvenking and Brothers Of Metal. When in truth their sound is closer to what you would get if Dragonforce and Blind Guardian had a child. I admit that I’d started listening to this band on and off because their bassist is also in Freedom Call and Chris was featured in one of their songs. But I hadn’t realized what I’d missed until this album came out.

They had me at the second single, 'Sons Of A Wolf'. The banging riff, the powerful vocals and just the mega epic atmosphere on that song soon got me hyped over the album, and in the end, my great expectations were met - this is a fully epic folk power album with a rather Blind Guardian influenced sound. Taking the folksy moments into consideration, I feel fair to say this makes a very interesting listen.

Frankly speaking, this album took a more direct approach than Unum. None of that atmospheric leads, most songs simply meet you head on with a heavier-than-expected riff. The guitar is getting more love, since the solos have been added to a slightly ridiculous length, but they’re still enjoyable in terms of melody. I especially like the one in 'The Deep Breath Before the Dive'. Yet they did not throw away their folksy elements altogether, so be ready to hear the flutes, bagpipes and acoustic guitar weaved into the music. "Flaming Bagpipes" indeed, the Scottish pride nearly ran true here, since the instrument is everywhere. Most songs are of the same structure, but my praises definitely go out to the first track, 'Enlight The Bivouac', a 11-minute song simply striving for epicness. It’s got several mood changing moments as acoustic strumming appeared in between aggressive riffs, and their background singers add perfectly to the sheer force of the chorus. 'The Tale Of The Three Hawks' went for a happier, lighter tune. Personally I’d found the last track, the pure folk song 'Quel Che Volevo', somewhat of a letdown of the album’s vigor, but I’m sure there are metalheads out there who would appreciate the fun change of style.

I’ve always found the vocalist Dario Vallesi, a cleaner version of Hansi Kürsch. He really delivered his voice perfectly this time, his high notes are not so strained anymore. And the drums. Efisio Pregio keeps up a very, very impressive performance throughout this album, fast and energetic. If you like your drums like Dragonforce then you should definitely check this out.

So the songs are getting a bit boring by now, I’ve been replaying the album for some time to write this review, and since most songs are of the same structure they're starting to drag. But overall they are epic and fast, and hence enjoyable. A folk power release I believe would make it famous soon enough and stand firm in the test of time.

Highlights: 'Enlight The Bivouac', 'Sons Of A Wolf', 'Last Bearer's Song', 'Prodigal Son', 'The Tale Of The Three Hawks'