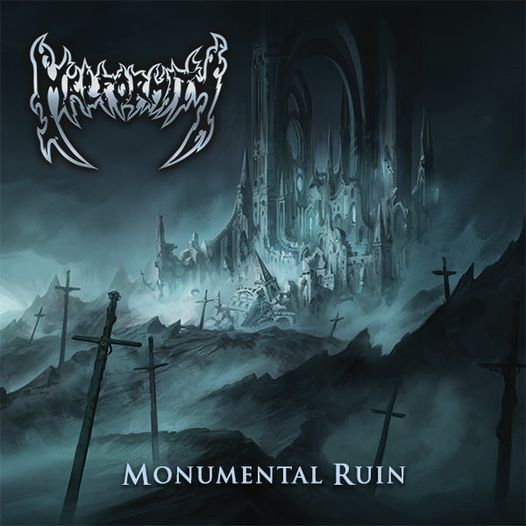 And I Behold..., Malformity, a death metal band that only up until now have managed to put out their first full length album since formation in the early 90s. Things are not the same as in those days, the golden era has left us in more ways than one even though the eldritch ways of those bands we cherish have been kept alive by this resurgence of the genre at its finest. Those times of infancy will always be the best but that should not discourage you from exploring the underground death sport as it is now.

The first full length album from Malformity (damn I love that name) has a Monumental Ruin-time of 60+ minutes, and you really can't blame the disgruntled souls in the band for stacking up their material till it can compete with black metal albums of the mid 90s (length-wise). Keep in mind Malformity is not just returning, they have a mission to fulfill, to demonstrate to the newbies that they still have spring in their shoes and bounce in their step, that can hang with the heaviest of the heavy in this day and age. Whatever the reason was for such limited music during their early days of existence clearly has had no negative effect on the quality of Monumental Ruin. In fact I'd argue that it has even helped the sincerity of the album; thus it sounds like fine wine that has aged well.

13 tracks total, 2 of which are bonus material leave a massive footprint within the underground workings of death metal. Monumental Ruin feels like an ass whipping that has been bottled up for years and has come due for us all in this damaged territory. The guys in Malformity play at a veteran level here, hitting all the right spots, playing all the right riffs and transitioning at all the right times to create an utterly dynamic and destructive death metal record. This is the hand of the teacher at work here, demonstrating with baffling precision and elegance how it was meant to be done post 1990. Consider it both a treat and a lesson in TRUE old school death metal to all witnessing the fall of the hammer on this thunderous awakening being Monumental Ruin.

A bewildering array of death metal through the respected stages and ages; from thrashing death, to death/doom to black/death to a mesmerising fusion of amalgamated and fundamentals of the genre. This album will leave you speechless, it's all here, Autopsy, Bolt Thrower, Incantation, Asphyx, Death, for fuck sake I could go on.... Monumental Ruin is a psycho-trip through the diamonds of the era all the while sounding of a master musician's final workings (hopefully not to be).

From the decapitating riff work and drumming technicality of 'Perverse Apotheosis' to tracks like 'Into Ruin', 'Monument To Decay', 'Immolated Archetype' and 'Facemelt Bloodgrinder', listen and be marveled and molested by the music these mad mechanics in Malformity have managed to materialize. It sounds like a death metal crash course covering 1990 to 1994. There is nothing about Monumental Ruin that resembles the fucking tripe that passes as death metal in the mainstream. This is like a long lost relic, dug up, refined and presented before a grand audience for both death metal pleasure and as a study guide for those interested in absorbing the blueprint and sacred techniques of the genre.

Riffs too numerous to keep track of, by the time one riff is done with you, bam! here comes another, no room for preparation; same can be said for the drumming aspect; thorough obliteration both in impact and technique on display. As though he has 4 hands, the timing, awareness and general functionality is marvelous as he is able to guide the multiple transitions in perfect synchronicity with bass and guitars. And unlike so many vocalists that sound worn out, the monster on the microphone makes certain he is an impending force to be reckoned with and can throw down with the loudest and deepest of them all.

Monumental Ruin possesses just too much to cover and credit in one write-up, and that's great, more than enough meat is available for ruin; this is the kind of album you'd most likely want to own on vinyl, get two copies, one to play and the other to collect dust in your cellar of fine crafts. Malformity have dug a 666 ft deep grave to toss all the undesirables of death metal into with Monumental Ruin.