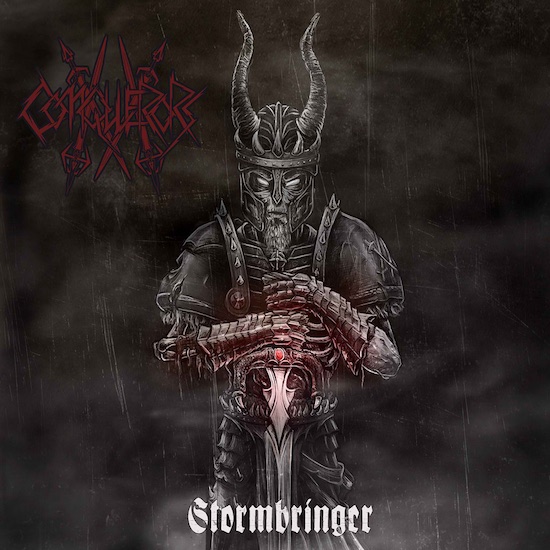 I am not the biggest fan of the whole thrash/speed metal revival, perhaps some of you know. In my opinion a lot of it lacks real aggression and atmosphere. To me its young bands copying the old heroes, just faithfully going through the motions without digressing too much from the tried and tested formulas. But every now and then, a band comes by that violently forces me to adjust my opinions. And let me tell you, Conquerors is such a band, because, damn, this is intense stuff!

A good description of their style would perhaps be a mixture of Possessed, early Kreator/Destruction and the first Merciless album, but interspersed with insanely fast parts. They keep up a very respectable tempo throughout, going at it up-tempo and speedy, but it is when the band really floors the accelerator that stuff gets intense as fuck. If Sarcofago had a serious meth problem when they recorded "I.N.R.I.", it would have sounded like this, no doubt. The riffing is simple but highly effective, carrying in it the spirit of bands like Holy Terror, Exciter, Whiplash and various German 80's thrashers (you can name a few, I'm sure), sounding deliciously demented combined with the pounding percussion, especially when underpinned by the furious blastbeats in the fastest parts of their songs. Drop on top of this an utterly acidic, vitriolic rasping vocal performance, and here you have an offering of truly barbaric, stupidly fast paced thrashing mayhem, and goddamn, do I love this! Playing may not be as tight all the time, but Conquerors more than makes up for this in the truly uncompromising delivery of their music. In its totality, it has me thinking of the earliest releases of bands like Sextrash, Sarcofago and Holocausto, but due to the remorseless intensity throughout, they also had me thinking of Holland's Inquisitor at times. A highly volatile mix like this could very well end up in a blur of indistinct noise, but the production on this album keeps it clear and streamlined, without sacrificing the raw feeling that music like this needs to exude. This is impressive stuff, I'll tell you that.

In a scene flooded with bands content with merely copying their peers, a band like Conquerors is truly a breath of fresh air. They do not reinvent the wheel here (thank the gods), but they give it a spin that is totally their own. I can hear where their influences come from, but they took it and ran with it. This is a compelling blast of balls-out bonkers thrash metal that every thrasher needs to hear at least once in his life.