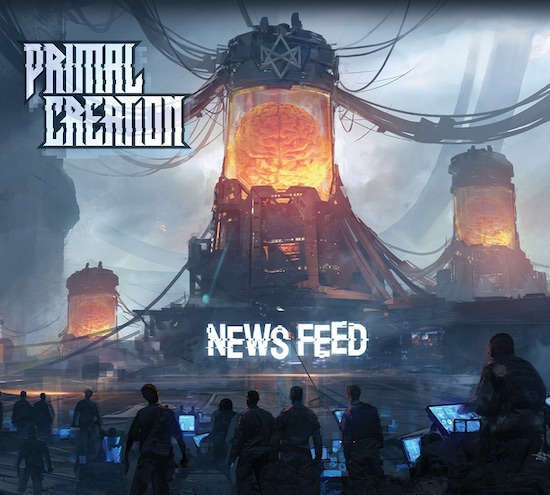 With metal, it's sometimes like with stamps. The rarer, the more valuable. I love black metal, but there seem to be five new releases a day in this genre. In contrast, pure thrash is comparatively hard to find. That doesn't make discs like News Feed a gift from the gods in the first place. Still, the tension is a minimal unit higher at the beginning than on the third black metal disc in the last four hours.

News Feed is advertised as modern progressive thrash metal. Rarely have I been so pleased to be lied to. From my point of view, the album offers mostly classic thrash. The main ingredient of thrash, the razor-sharp riffs are not missing. Okay, the guys do not permanently focus on speed, but this characteristic alone cannot give an album the label of progression. And frankly speaking, the songs are neither overly complex nor do they concentrate on technical gimmicks. Modernity also does not play an important role. The tracks are merely performed in a modern, but not inappropriate sound. Rather, it bangs and hisses at all corners and ends. The guitars are hard as nails, direct and cleanly defined. The other components are not neglected either. No question, the Belgians of Primal Creation love to chop wood, but they do it always in an elegant way. This is how very interesting pieces of wood are created. It is worth taking a closer look at the best ones.

'Follow the Reader' starts with a nearly fragile melody line, but the well-inserted bass drum quickly gives the number a harsher appearance. The bridge takes the next level in terms of stomping heaviness and the aggressive yet catchy chorus results in the melody of the beginning which comes fully into its own now. The barking, powerful voice adds the finishing touch to this highlight. 'Please Disperse' begins like a fast, straight and strict thrash rocket, but it holds a more or less melodic mid-tempo part as well and the hostile shouting is interrupted by mechanized vocals. In addition, pieces like 'Watch it Burn' or 'Vial Play' also do not take prisoners.

Too bad that the guys from Belgium cannot keep the high quality level during the work. News Feed is free from flops, but this is not to say that each and every individual song enriches the history of thrash significantly. A few riffs remain without effect, especially in the two songs of the album. (The stop-and-go guitars in the verses of the eighth track are even somehow annoying.) Anyway, thrash metal is alive in view of such an album which can be compared with the second work of War Curse and, to a certain extent, with the debut of Trapped in Purgatory. These more or less new names show that this genre hasn’t lost its inner strength during the last almost four decades – even though it does not produce the overkill of release like the black subgenre. Maybe exactly this is the reason, why thrash defies the laws of ageing.