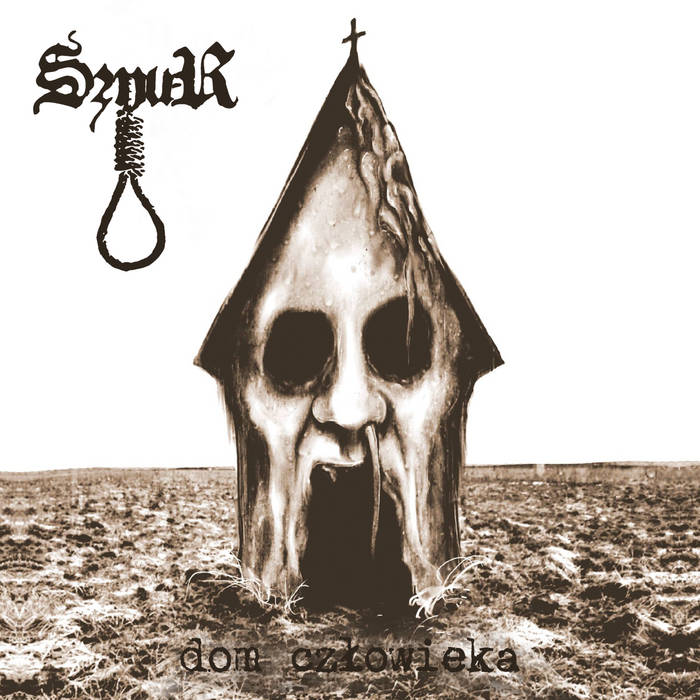 Sznur wastes no time on the 3rd full-length album in which a most misanthropic and hopeless atmosphere is carved out for the entirety of 30 minutes. Casting a huge dark cloud over the black metal soundscape seamlessly with 'Czuje Zapach Twojej Cipy' that goes for mean riffing to melancholic sound textures via well embedded tremolo-picking. Yet this track does not speak entirely for the rest of Dom Człowieka as you'd be made quickly aware of the changing sonic tides on a track like 'Popłód' that would boast a more power chord structured set of riffs early on that suddenly take a cruel descent into a slightly more melodic/rhythm driven passage marked by vocals exclaimed with a nasty throaty snare.

Dom Człowieka becomes a showcase of insanity with samples thrown in to make you even more uncomfortable as you begin to delve into the mind of something mentally questionable. 'Co Się Stanie' dose this to great effect and with that said I'd even go on to note that it may be the adhesive glue that such a short album needed to give some sort of semblance to the music. Hence, it goes from listening to some aggressive and melancholic melodies, to a semi-theatrical/documentary of sorts or at least some sort of explorative undertaking.

The artwork is intriguing and is an excellent match for what you are about to experience on Dom Człowieka that in turn, also gives the record a depraved, unsound mask that adds to the enigma of the music and lyrics. Take a look at the lyrics to 'Popłód' and try to convince yourselves that they're not fucked back to front. A true question mark placed before you when it comes to dissecting the psyche and meaning behind such mental misery. The lyrics on the album become as strong as the actual music, which is telling of the creative effort put into Dom Człowieka. Listeners will be most pleased, disgusted and confused. Another strong Godz ov War release and a win for Sznur.