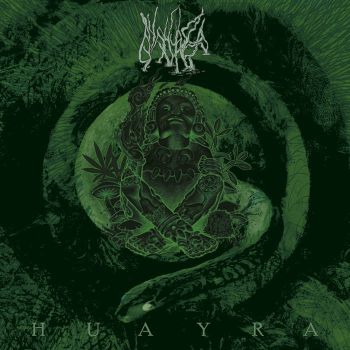 Yes, they are named after a South American hallucinogenic plant. And yes, one song is about shrooms. But no, if you’re looking for something fun to listen to while taking drugs, Ayahuasca is not for you. Huayra is transcendental in a bestial, inhuman way. It’s angry, ferocious, at times terrifying death/thrash with an occasional native Amazonian tinge.

What really makes these guys unique is the vocal delivery. Inguetuzca sounds like a blend of Mille Petrozza on the low end, and Sacrifice’s Rob Urbinati on the high end, but faster and more pissed-off than either. They also use some of the best group vocals at times. Where this technique is often cheesy, Ayahuasca do it in a way that really fits the atmosphere. It comes out as a distant echo; and especially on the psilocybin mushroom-themed song 'Teonanacatl' it produces a fever-dream type effect that’s deeply unsettling. Psychedelic, yeah, but not all “trippy” - this is frightening stuff.

Guitarists Bituima and Mohan, and bassist Porras capture a special mix of raw aggression and Amazonian culture too. They play with that chainsaw sound and prominent low-end we loved in early Sepultura; and manage to make a simple 2-minute (and 2-word) blast like 'Revoluto' work just as well as a more complete song like 'Guasabara'. The latter’s tremulous gallop would not be out of place alongside such classics as Kreator’s “Command Of The Blade”. And yet, Ayahuasca’s section loses nothing when they tone it down for the soft instrumentals either. 'Wayra' and 'Chacruna' both feature what could be relaxing Latino acoustic guitars floating down some murky tributary, were it not for the menacing anaconda of Parros’ thick bass slithering below. Even the uncredited flutist and jungle animal samples don’t allow to let your guard down past the dangerously-too-quiet stage. You’re still on edge waiting for the ferocious electric guitars to smack you again.

Album credits do mention “percussion” along with regular “drums”, but I’m not sure whether that means there are native percussion instruments used too. Either way, there is a certain looseness - though absolutely don’t read that as a criticism! - that helps drummers Ramirez and Lulomoy fit into the wild atmosphere of Huayra too. In the same way Stiny Plamenu banged on random pipes to accent their “sewers metal”, there’s something about Ayahuasca’s drums that feel like they could be playing on fallen logs in the rainforest.