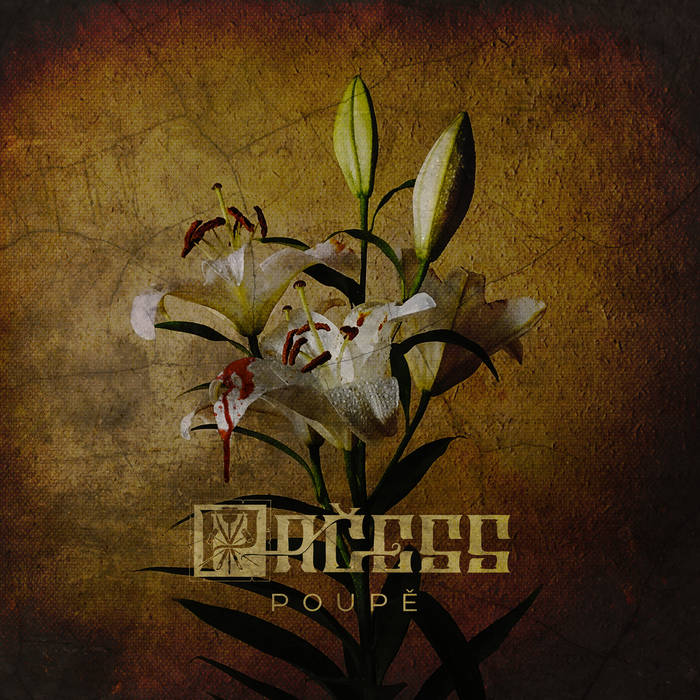 Pačess have been around for some time, Poupě being their third full-length album since the release of their debut a decade ago, but this time round have graduated from ostensibly an eponymously-named solo project of main man Pačess to a full band arrangement, featuring various luminaries from the Czech metal scene. On the evidence of this release, the new-found collaboration has been highly beneficial, and the result is a strong and compelling album, which skilfully traverses a number of extreme metal sub-genres, while never moving too far into the realms of the avant-garde to lose a clear emphasis on memorable song-writing, featuring an array of hooks sharp enough to burrow deep under your skin.

The title track opens the album in elegant style, with lush swells of synth gradually giving way to chugging guitars, and mournful spiralling leads, everything coming together into an approximation of the kind of mournful, gothic melodrama that suggests that although Pačess hail from the Czech Republic, their influences stem predominantly from Scandinavia. This slow-burn epic really soars when it transitions into a down-tempo bridge section which combines the kind of pastoral mellotron break that Opeth utilise frequently in their post-Blackwater Park output, with some delightful, minor key twin guitar harmonies, hinting that somewhere below the surface lurks a band that have constructed a diverse and wide-ranging sound on a solid foundation of metal classicism.

One of the most intriguing features of Poupě, is the extent to which the band's sound changes from track to track. At times, this is reminiscent of the scattershot approach of Root, which may seem like a lazy comparison given their reputation as arguably the preeminent Czech metal band, but is in fact justified in the light of the fact that Pačess share members with Big Boss's occasional side project, and some of the off-kilter vocal phrasing in particular shows clear evidence of a shared sensibility. Despite the shape-shifting sound, there is enough of a common sonic thread running through the album to ensure that it just about hangs together, but it is still slightly jarring to move from the doomy rock of the title track to the Watain and Dissection-flavoured melodic black metal of the admittedly spectacular 'Sommelier'. Tremolo guitar figures mesh seamlessly with chiming synth lines, and the band show a keen sense of dynamics, shifting the tempo throughout the track, each section bleeding into the next without sign-posting the joins too clumsily. Indeed, Pačess have a knack for the composition of deft arrangements, which ensure that the majority of tracks contain an unforgettable and original motif designed to ensure that the listener will feel the unmistakeable desire to return regularly, in order to sate their appetite for more of the welcoming and enveloping atmosphere that the band are so adept at creating. 'Jako Most K Lidem' is the most thrilling example of this, placing a rolling bassline courageously high in the mix, the guitars converging with it to form the centrepiece of the song, a whirring, industrial-sounding single-note riff creating something magnificent from a limited set of ingredients, proving that the greatest ingenuity can often be found in simplicity.

Not every component of the album is quite as engaging as this, however, and it would be disingenuous not to point out some of the minor flaws in what is nevertheless a splendid piece of work. The strength of the first three tracks is not quite matched by the second half of the record, which does not contain the compositional depth of the first half. The stirring folk metal vocal melodies of 'Butan-2, 3-dion' are not quite enough on which to hang the rest of a meandering song, and similarly, 'Reinheitsgebot' commences with solid riffing that again recalls Watain, and even their compatriots Obtained Enslavement, in its slightly off-the-wall use of intrusive, but fascinating, synth arrangements, but overall, it is ultimately somewhat one-dimensional for a band that clearly have the tools at their disposal to craft something more intricate and progressive. This is proven decisively by the truly immersive 'Jménem Lilie', which closes the album in style, a bittersweet slab of magisterial gloom to bring us full circle, matching the quality of the excellent opening track.

As a whole, the album displays a satisfyingly organic feel, conjuring heady atmospherics with layers of sound, synths draped over the metallic framework like a fuggy, low-hanging haze, suffusing the entire album with a dreamlike quality which enhances the sophisticated and classy compositions. Poupě apparently translates from Czech as 'bud', and it is a well-chosen title. Pačess are clearly a band that, in the right conditions, can flourish and flower into something rather beautiful. In the here and now though, Poupě is certainly impressive enough to draw admiring glances from all who pass, and resilient enough at its core to withstand the changing of the seasons, ensuring that it will continue to stand tall long into the future.