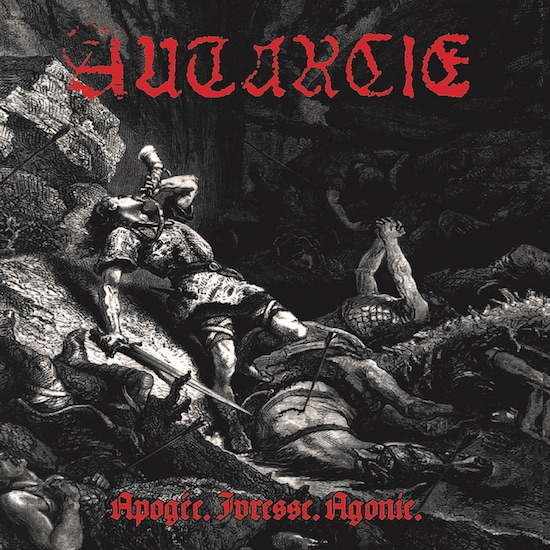 And after yet another 55 minutes I’ve yet to change my mind, Autarcie's Apogée.Ivresse.Agonie is going to be a massive success for the year and for supporters of French black metal. From the prelude to the grace and grandeur that is 'Nation' through 'France Profonde', 'Le Bardit Des Hardis' and the title track 'Apogée.Ivresse.Agonie', this album stands tall and proud with exemplary music amidst a growing crowd of mediocre and soulless black metal. Autarcie are no strangers to black metal and the underground, their albums over the years have garnered them a rank of high esteem within the vast black metal spectrum and this latest installment will fortify greater their revered establishment.

Apogée.Ivresse.Agonie revels in an attitude of victory intermingling with melancholy, and beauty. Every track is presented with a glow of magnificence and is kept active for the entirety of the album. Like a film that emphasizes every angle, every frame is as eye catching as possible, thus the same applies to Apogée.Ivresse.Agonie, every rhythm, every section and transition is a moment to recall, capture and preserve; sheer musical poetry. The songs are complete earworm, sonic delight from start to end with riffs sitting on mountains with its head held high and drumming that decorates the floral space of riffs with taunting cymbal and HI-hat additions.

Keyboards are utilized to great effect whereby they expand the already broad and lush textures of riffs and drums to dreamlike soundscapes. Melodies romantic and of a victorious tone roam and merge during the runtime of Apogée.Ivresse.Agonie that’d then see the brief incorporation of battle samples at select intervals. Meanwhile the vocals being of a raw and ravaging tone manage to express grief, loss, anger and victory. Altogether with the instrumental elegance and ambition, the record shapes itself into a luminescent product of French black metal that will remain an emblematic installment within Autarcie's catalogue.

Having heard Autarcie's past work, there was no questioning the brilliance that would be brought to this newest entry. Still demonstrating the ability to offer something remarkable though seemingly still adhering to simplicity. Completed with picturesque and bold cover-art, Apogée.Ivresse.Agonie greets the listener with an intriguing and engaging visual companion to the mesmerizing music to be heard on the record. Coming a long way in black metal since inception and still having kept the respect and support of the underground, Autarcie once more, humbly crafts an album of majestic heights, a testament to compositional supremacy.