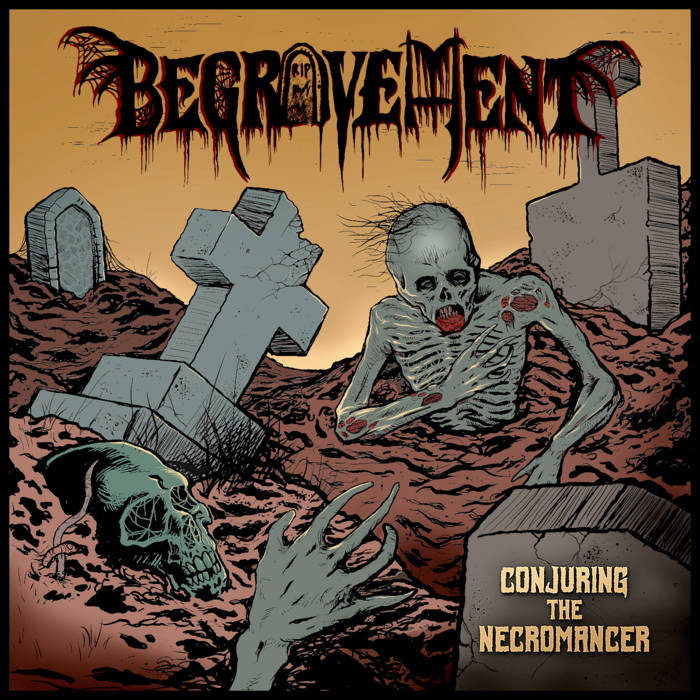 Spawned from Minnesota, Begravement made their debut some months ago with the release of Conjuring The Necromancer, a 6-track EP that has shown a lot of potential from this young group, as well as a proper homage to the classics of old.

With a brief sinister intro we are introduced to 'To the Grave'. Begravement's style is rooted in death/thrash, yet still they manage to incorporate technical, progressive and sometimes avant-garde elements into their songwriting, with each track having a distinctive identity on their own yet complementing each other as a whole cohesive record. This song in particular features 6 guest vocalists, who take command of track's vocals along with the band's main vocalist. 'To the Grave' feels like a classic death/thrash track, while it's follow-up 'Destroying Angel' is a bit more mid-paced and more straight-forward in its delivery, with the track being a feast of fantastic guitar solos.

From here though, everything goes up in intensity as the next track hit you in the face. 'Death-Obsessed' is a great old-school death metal track that could've easily been recorded in the late 80's, with a step-up in speed and overall intensity with perfectly executed leads thrown around. Next, we have 'Opaque Malevolence', the most dissonant, abrassive track of the entire record, with pummeling drums and twisted guitar riffs that may remind you of early Gorguts. 'Conjuring The Necromancer' stays on the opossite side, having marvelous scales and melodies throughout while featuring a brief theremin section and some short choirs for atmosphere. And finally we close with 'Obliterate The Convent', a more straight-forward death metal track than the previous ones, ending with a keyboard fade-out that some may find very familiar...

Music-wise, the band has tackled every corner of the death metal spectrum in here. Whether you like a more classic approach, a more tech-death feat or prefer the dissonant sound, this EP has you covered. Ezra's vocals may be a bit rough and could improve, but he is a very competent guitar player and it is evident that he has improved a lot since his solo project and it complements well with Owen's solos, who is a great player as well and also in charge of the drums. Matt provides backing vocals and bass, and his work is great as well, with his instrument adding that much needed weight on top of the music, while also having its brief shining moments.

Production-wise however, I have some discrepancies. First of all, the guest vocalists could've been better used if shown in different tracks rather than doing a one-off and never return, and some of them are mixed a bit lower than the others making it inconsistent in their presence. Second, the mix is a bit off, with the guitars feeling a bit too "far back" than the rest of the instruments while the vocals have a more of louder and closer sound. Last but not least, it feels to me that the tracks were longer than they should be, the average length being around 5 minutes. The repetitive nature of the tracks makes this more noticeable and (personally) the tracks could've been more compact and still showcase the band's musical abilities without overstretching it for too long.

Overall, it is a great display of prowess and passion for death/thrash metal in all its ways. It may be repetitive at moments and a bit longer than it should (and in need of some improvements), but if you give it a chance you will most than surely enjoy what Begravement has for you.