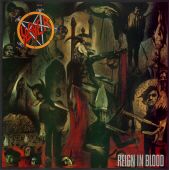 Please excuse me for publishing this text, but I guess the review production of a thrash metal fan remains incomplete unless he has written some lines about Reign in Blood. Honestly speaking, I had a lot of respect for this task, because it is hardly possible to find new aspects concerning this ultimate classic. Thus, I delved into the past. When I took a look at the review in the German RockHard magazine from the year 1986, I was surprised that the guy was writing about "a mixture of hardcore and thrash". From my point of view, the then modern hardcore (Crumbsuckers, Agnostic Front or S.O.D.) has nothing in common with the here reviewed outburst of energy. Reign in Blood is pure thrash metal, it is more or less the quintessence of this genre. Of course, punk (and hardcore) can be seen as an early stage of development in terms of vehement music and it is therefore a precursor of thrash. But if you agree that a certain number of punk elements is inherent to the entire genre, then you will also share my conviction that Reign in Blood provides nothing else but undefiled thrash.

Despite the opinion of a minority of fools, the third work of Slayer is not - and it was never - the fastest album of all times. High velocity plays a very important part, no doubt about it. Nevertheless, the band was also aware of the mightiness of well executed mid-tempo sections. "Postmortem" is all I need to say. The brute riff of the verses hit the listener like a sledgehammer and the crushing song celebrated the mid-tempo approach in an almost homicidal manner. Even the most representative track of the album had a considerable mid-tempo part. You guessed it, I am talking about the upsetting "Angel of Death". Without losing its menacing aura, the probably most prominent track in the history of thrash metal slowed down after an extremely furious and barbaric start. The high-pitched scream of Tom Araya at the beginning indicated a level of hysteria which did not come true. Slayer showed their grimmest face, but they kept control and played their instruments with the highest precision instead of drifting into chaos. Anyway, the unbelievable sharpness of the riffs and the crystal-clear production shaped one of the most intense listening experiences so far.

From a German perspective, "Angel of Death" broke a taboo. To sing about the processes in Auschwitz without condemning the whole regime of the so-called Führer at the same time was nothing less than an inexcusable mistake. Or it was just cold-blooded calculation, because the combination of the song, the moronic "Slaytanic Wehrmacht" merchandise and the "Heydrich" sticker on the guitar of Jeff Hanneman (R.I.P.) led to a very discussable picture. Hard to believe, but the controversy still goes on. The "Zeit", a respected paper for narcissistic academics and other eggheads, took the death of Hanneman as motivation to express its disgust about the lyrics of "Angel of Death" once again - 27 years after the publication of Reign in Blood! A good example for the German tendency to play the unpleasant know-it-all. Be that as it may, to break a taboo is always good promotion - and how many taboos have remained? Even in the eighties of the last century, many of them had already vanished into thin air. Thus, the Nazis and their cruelties were just too enticing. Well, the plan worked out. Nevertheless, the best arguments to dive deeply into the album were delivered by the music itself.

Unrelenting, daring and breathtakingly exciting, Reign in Blood seemed to kill any kind of musical conventions. It would be a massive understatement to say that the full-length appeared as an acoustic battering ram. It was much more than this. The violent compositions benefitted from the perfect production that I mentioned before. Sound engineer Andy Wallace said that he loved dry, in-your-face aggressive rock, without tons of reverb. Consequently, he and Rick Rubin did not hesitate to realize the appropriate, electrifying mix. Their approach resulted in mega-aggressive, completely vile and ultra-vicious eruptions like "Piece by Piece", "Necrophobic" or "Altar of Sacrifice" which appeared as a nuclear bomb due to its extremely explosive beginning. These sonic documents of brutality developed the full force of their titanic riffs relentlessly. Admittedly, I could have mentioned the other tracks as well. The holistic album was a sonic orgy of blood and 29 minutes were enough time to erase each and every enemy, poser or random victim. It does not matter whether you listen to the ominous guitars at the beginning of the title track which lead to craggy riffs and sheer franticness or you lend an ear to the smooth yet murderous "Epidemic", because Slayer had penned spectacular killers without exception. As if that were not enough, the band achieved a tremendous technical level as well.

I know, I am not alone with my opinion and maybe it is not an opinion at all but the simple truth: Reign in Blood is rather a dogma than a "normal" album. My personal favourite Hell Awaits has a more diabolic aura, but from an objective point of view and with regard to its undisputed relevance, the here reviewed work probably constitutes the mother of all thrash albums. The likelihood is low that somebody can convincingly explain why exactly this full-length became the showpiece of the sub-genre. And that is no surprise, because real art has always a magic touch. Too bad that Slayer were not able to preserve the chemistry which was crucial for the creation of this overwhelming milestone.