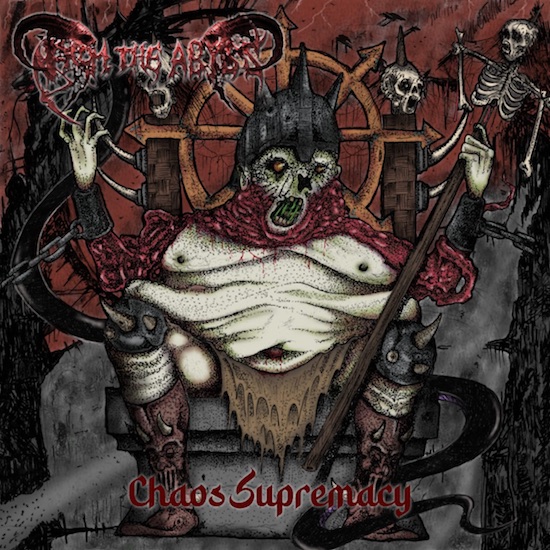 From The Abyss (Cuban death metal) will spawn their second full-length titled Chaos Supremacy at the end of the month, and if you like your death metal in mid-paced headbanging speed, then this will be for you.

Quite the peculiar death metal record that this is, as it relies on slow, crawling pace rather than the frenzied velocity of most death metal out there. With the exception of one track, almost the entire album stays in this mid-paced approach. This does work in their favor, however, as it is pretty much a headbanging feast. Heavy, catchy riffs mar this record from start to finish, which may feel a bit over repetitive but nonetheless it is enjoyable. Drums pummel their way through the tracks, with a high dose of double bass. Vocals are well executed, with a deep growl that accentuates the album with inhuman force, with some small breaks of spoken words here and there.

Production-wise, it takes a similar approach to the old-school swedish sound, but a bit more "meaty". It reminded me of "Nightmares Made Flesh". Every instrument is crystal clear in the recording, with none taking up more than the other, a perfect balance in my opinion. As stated before, due to the record being a more straight-forward, mid-paced death metal reminiscent of Morbid Angel's work, it may become a bit stale and boring at moments, but it does offer a lot of treats, great riffs, twin melodies and great solos all over the place.

The album ends with a cover of my favorite death metal band, Bloodbath. 'Mock the Cross', which is perfectly executed in all its blasphemous glory. If you are tired of the over-the-top frenzied death metal, and love the mid-paced work of Morbid Angel, Incantation and Bloodbath, then you will love this album once it's released. I myself am a fan of the more brutal, fast-paced death metal bands but still I found myself headbanging a lot to this record. It may lack a bit of variety but overall it is a well executed record. Stay tuned for its release on April 30th through Vrykoblast Productions.