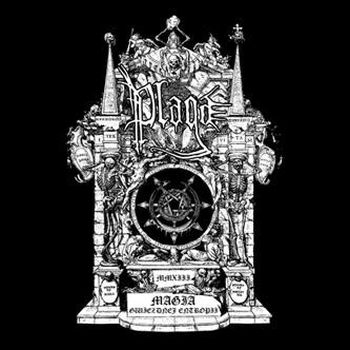 I have a good buddy in former Yugoslavia. He belongs to a rare species, because he is a black metal romantic. Whenever it comes to his favourite bands, he is overcome by an authentic change of feeling and kisses every letter when he pronounces their names. For example, Plaga (or "P-L-A-G-A", as he would say). So I became aware of this horde through him and that alone is a good reason to dedicate this review to him. But of course this text is primarily about Magia Gwiezdnej Entropii, Plaga's only long-playing record to date, which finishes after just under 36 minutes.

The intro creates a suicidal atmosphere. I don't know who is taking their own life here, but it is clear that this is the background music to the free fall of a lost soul. The first regular song sounds great. The thin guitar line scratches like a well-sharpened razor blade in the ears. Tempo changes keep up the tension and there is also a surprising yet well done change concerning the vocals from mean to anthemic. The only thing that does not completely work is the snare drum. Sometimes it sounds as if the dude behind the kit is hitting on a piece of plastic. More generally speaking, the drums as a whole have to struggle to be heard.

Despite the aforementioned tempo changes – they also occur during the further three songs – the music on the whole seems relatively sluggish, but by no means boring or unimaginative. Plaga’s line-up does not consist of high velocity fanatics, but the band accelerates the rhythms from time to time and is able to intensify the compositions skilfully. For example, the third track surprises with fast sequences after a solo that makes the song almost derail. Thank God, this does not happen. Plaga stay on track during the entire 36 minutes, inter alia because of the hateful, expressive vocals. The Polish language is used in three tracks and it has a brisk, sharp sound in my ears. In other words, it fits the musical genre very well.

In a few places, for example at the beginning of the biblically inspired 'Slaying The Spiritless Abel' or in some of the solos, Plaga use guitar harmonies that one could well imagine in other, non-metal contexts. But the genre-typical, perhaps simple but definitely effective guitar lines dominate. When they are underpinned by the not permanently but purposefully used double bass, a vicious density is created. It gives the album some additional plus points.

The same goes for the production. The disc does not sound perfect by any means. I have already mentioned the shortcomings of the drums. But the charm of the underground makes up for such negligible details. Black metal needs an aura to fully unfold its flavour and the work from 2013 is certainly not lacking in atmosphere. The closing title track is the final highlight of an album that has no real weak points. Magia Gwiezdnej Entropii is not one of the heaviest or most brutal albums in the genre, but it lives up to its name in that it does indeed exude a certain magic. Should Plaga pick themselves up again to tackle a new work, I would be curious to hear it. Did I say "Plaga"? Hm, perhaps it would be more appropriate to pause for a moment and then say "P-L-A-G-A". Well, I think I'll get some advice from a buddy in the former Yugoslavia.