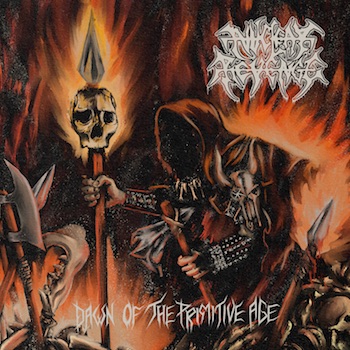 Nuclear Revenge popped up with their debut in 2019. It was no groundbreaking work, but a really cool album with fast-paced torpedoes at the interface between thrash and black metal. With that said, I gladly received the news that they return with their second full-length. Dawn Of The Primitive Age does not show a new side of the Basques. Instead, they stick to their guns. The word “primitive” often has a negative connotation. So one might say it does not describe the songs fittingly; nevertheless, the band concentrates on simple, straight and speedy outbursts. Unfortunately, some tracks suffer from a few details. For example the opener loses a lot of its strength as soon as the feeble solo sets in. Inter alia 'March Of The Undead' shows that they can do better solo parts.

Nuclear Revenge sound nasty, evil and restless. In 'Dust', the nagging vocalist invites us to “f**k off and die” and this can be understood as the quintessence of his performance. The mangy guitar tone seems to be borrowed from a raw rehearsal tape of old Possessed. It dominates the sound without offering an overdose of variety and therefore the album is not totally immune against monotony. Moreover, the drums and especially the bass guitar have to struggle in order to be heard. Nevertheless, the sheer aggression the mix develops is pretty impressive and aggression is exactly the feature this kind of music needs essentially. I freely admit that I cannot identify an outstanding highlight, but I guess that’s both a blessing and a curse. Maybe with the exception of the opener, all songs reach a more than acceptable quality level. And, by the way, the ten tracks show that the band does not run out of ideas. Guess we all know a lot of albums where this is exactly the case.

If I would be forced to pick out a single song, I would select the epic 'Eyes Of Revelation'. Its riffing at the beginning promises tension and the following speedy rhythms do not disappoint as well. But you must know that the term “epic” must be treated with caution in this context. Be that as it may, this tune illustrates that the dudes are able to present strong mid-tempo sections, too, because they can mostly rely on the expressiveness of their riffs. So from my point of view, Dawn Of The Primitive Age is a good full-length of an honest and likeable formation, no more, no less. Maybe it’s not relevant for some groups of metalheads, but it deserves the attention of every curious black thrash maniac. Hopefully it does not drown in the flood of metal releases we receive every week.