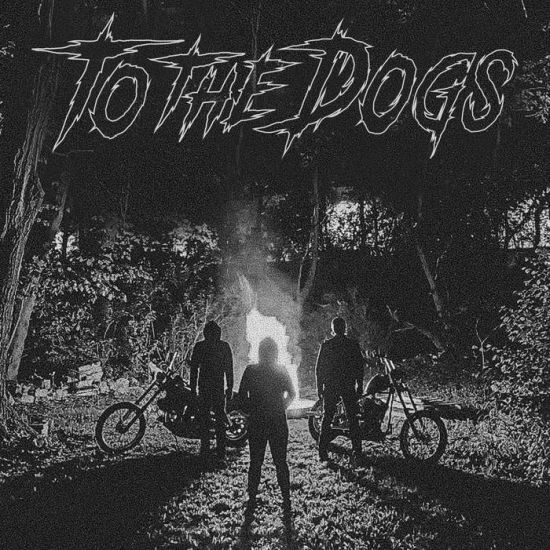 My girlfriend has a beautiful cat. To avoid misunderstandings, she is naturally not as beautiful as my girl! But she should be much more beautiful than the dogs to which this EP is dedicated. To The Dogs - that's not only the name of the release, which first existed in demo form and will now be released as a 7" in a few days. For the sake of simplicity, the trio from Wisconsin also gave themselves this name. The lady and the two men locate themselves in the Bermuda triangle consisting of black metal, thrash metal and crust. To be honest, black metal plays the most subordinate role from my point of view. On the one hand, I'm of the snooty opinion that US Americans can't produce good black metal. Consequently, the three songs on To The Dogs lack any atmospheric element, except for an urban darkness. This, in turn, points more in the direction of desperate, angry crust. Now there may be more energetic formations in this segment. At every bus stop, in front of every furniture market and at every lonely lake in Sweden, you are likely to encounter at least one more furious crust formation.

But that doesn't mean shit. To The Dogs have the primitiveness of a rabid edition of At War, the pissed-off attitude of the Pro-Pain singer and the rumbling component of metal-punk bastards. They keep the songs pleasantly short without letting them degenerate into absurd miniature fragments. Of course, there are no frills whatsoever. There is simply one kick after the other in the stupid face. At the same time, the girl on the bass "sings" roughly as melodically as Sabina from Holy Moses - in other words, in a pitch that even attack dogs wouldn't describe as friendly. Or is that the guy on the guitar screaming to the permanently aggressive roaring guitars? Once again: I don't give a shit. The three songs immediately settle into the auditory canal and even Mr. Grind from Toxic Holocaust will have to admit that he has rarely reached this level of catchiness so far.

I have already mentioned the guitar sound. It is undoubtedly the defining element on this 7", which leaves a harsh and heavy overall impression. The tracks on the A side sound, in my opinion, a bit rougher and faster than the band's anthem, but these are only marginal differences. All in all, every note is in the right place. To The Dogs are welcome to release more, I'm curious. However, I will never join "to the dogs" wholeheartedly. I like my girlfriend (and her cat) too much for that. What a romantic end to the review for a totally unromantic work.