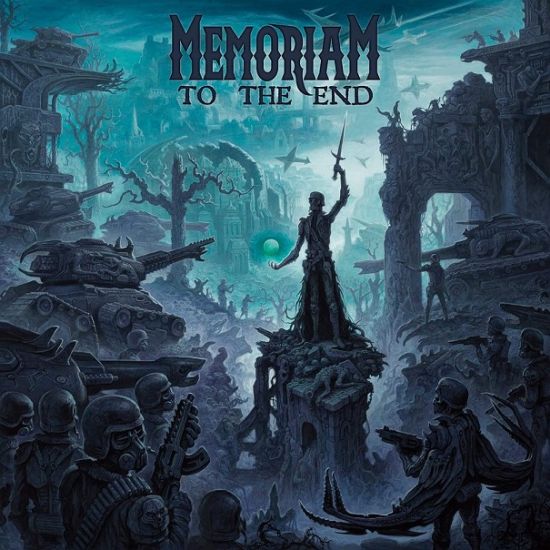 Type: Full-Length
Release Date: March 26th, 2021
Label: Reaper Entertainment
Genre: Death
1 Onwards Into Battle
2 This War Is Won
3 No Effect
4 Failure To Comply
5 Each Step (One Closer To The Grave)
6 To The End
7 Vacant Stare
8 Mass Psychosis
9 As My Heart Grows Cold
MetalBite on YouTube
MetalBite on YouTube

Memoriam released their fourth album now, which is quite remarkable considering that the band has only existed since 2016. Much has been written about the first three albums, which (also cover-wise) represent a trilogy. Especially the second album The Silent Vigil has caused a lot of irritation, because it was a bit, let's call it kindly "strange". What of course always hung like a sword of Damocles over the band's heads, or still does, is the obvious comparison with Bolt Thrower and Benediction. Apart from that, there has been a line-up change on drums. Andrew Whale had to throw in the towel for health reasons and was replaced by Spikey T. Smith. So much for the prehistory. But what does the new album To The End offer?

First of all, it should be noted that Memoriam continue to stick to their house and yard artist Dan Seagrave, who has once again designed an absolutely stunning cover. It shows once again soldiers, and tanks in a dystopian world and it's definitely worth taking a closer look. There should be no need to mention that with Dan Seagrave.

Musically, on the other hand, there are some surprises on the album, to which I will come in a little more detail. The first thing to note is that Memoriam have managed to move out of the shadow of their predecessor bands. For me it is the first album of the band that I do not compare with the already mentioned names, but consider Memoriam as a truly independent band. The band manages to pack their Bolt Thrower-like riffs and arrangements very clearly in the background and instead create something that sounds (in parts) like some old hardcore stuff and (and this is for me the biggest surprise) really well written atmospheric songs.

'Onwards Into Battle' starts as a rather slow track (in the first line Karl sings "Onwards into Battle one more time" - hopefully this is not yet the band's swan song), which in its course, however, clearly picks up speed and creates a rather oppressive mood. It's the only song that allows Bolt Thrower reminiscences and it is still an excellent introduction to the album. 'No Effect' begins with a dramatic intro, which is soon replaced by catchy riffs and galloping drums. Here you can definitely recognize the aforementioned hardcore influences. 'Each Step (One Closer To The Grave)' is an almost doomy song that creates a very oppressive atmosphere, especially when you think about the lyrics and become aware of your own mortality. 'Vacant Stare' is another atmospheric song that becomes quite interesting due to the staccato-like riffs and Karl's vocals also make the song seem very aggressive. My absolute favorite track, however, the band has saved for last - 'As My Heart Grows Cold' is probably by far the most atmospheric song Memoriam has written to date. The melody line gives me goosebumps every time. The atmosphere the song creates is again very oppressive - the song would also fit well to a science fiction movie or a drama. Absolutely great!!!

Now remains the need to say something about the production. If the last albums were in parts a little bit difficult to get used to, this time Russ Russell has managed to create an absolutely coherent production, which actually does not leave much room for criticism. The instruments are clearly audible, nothing is overdriven or underproduced and Karl's voice sounds again as it should be - clear and powerful.

So what is the conclusion of To The End? It has become a pretty convincing album on which the comparisons with Bolt Thrower and Benediction are no longer needed and they are not justified. Memoriam have finally managed to emancipate themselves from this and do their own thing. Only the song 'Mass Psychosis' leaves me a bit disturbed, because it goes quite into the industrial track, but that's my personal taste.