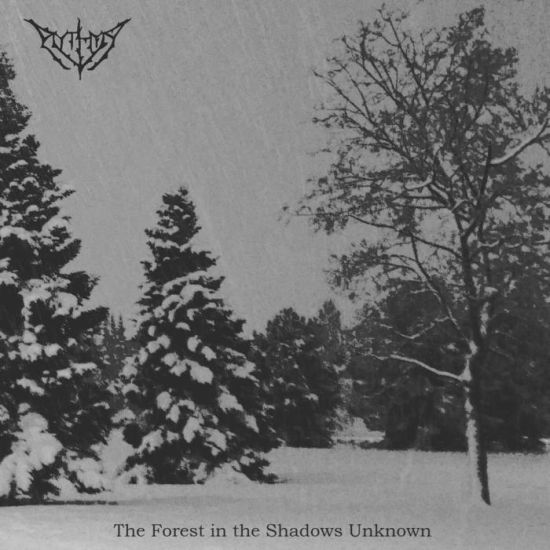 Buy on: Bandcamp
Type: Demo
Release Date: February 21st, 2020
Label: Independent
Genre: Black, Death, Melodic
1 Buried In The Snow
2 The Forest In The Shadows Unknown
3 Bound In Darkness
4 Into The Black
5 The Gentle Touch Of Death

We've all heard the classic story about Varg recording "Filosofem" using a stereo instead of an amplifier and the worst mic he could find with the explicit intent of making the music sound as horribly compressed as possible, and I daresay we've all heard the countless black metal acts inspired by his works. 'Raw' production nowadays has become a hallmark of the metal underground to such an extent that, in the vast majority of cases, there's no longer anything particularly exciting about it - it's just par for the course. But on certain, rare occasions, a band can surprise you, be it simply by taking the style to never-before seen limits (Burzum and Beherit being early examples of this) or by placing the production style in a context it is not often seen in, with Demon Bitch's lo-fi trad metal being my shining jewel of this approach. And on his sixth demo in just three years, the mysterious lone member of Aythya presents us with a combination of both philosophies; extreme rawness in an unexpected place.

The Forest In The Shadows Unknown is like taking a melodic black metal foundation and then stripping away any element that could be deemed in some way extravagant or unnecessary until only an utterly minimalist, frosted core remains. The riffs are euphonious yet steeped in that depressive melancholy that belongs unreservedly to Finland, each a simple pattern that lasts just long enough to let the atmosphere wash over you in an almost droning, hypnotic manner, but they're always varied up before outstaying their welcome or becoming a slog. Their many repetitions surround you with bleak snowscapes, empty glades to get lost in, but they offer no solace. From the hollow, monotonous pounding of the drums to the half-croaked mumbles that constitute as vocals, every facet of the demo evokes pure, joyless defeat.

And the two instrumental tracks only add to this brumal isolation, their lonely synth lines seeming to wander aimlessly through a frozen desert bereft of life. These tracks feel much more expansive than the metal ones, which, while somewhat inconsistent with the atmosphere, thematically is an excellent decision. The three underproduced black metal songs oppress you with their desolation - one could view them as dying alone in a field of snow, frozen numb and unable to see through the stinging mask of white that covers your eyes. Hold that image in your head, and then take the expansive synth instrumentals as a sweeping view of the whole of the snowscape, the realisation that this featureless sheet of ice stretches on for miles around. Yes, it's an escape from the cruel confines of your frostbitten body, but in the end it only serves to intensify your loneliness.

If there's a single complaint I can level against this release, it's one that can be handwaved away as a matter of pure personal taste. I loathe to base a criticism off my subjective perception of what a release should be rather than what it is, but something about the lyrics doesn't sit right with me. They work, there's no doubting that; it's hard to misinterpret the artist's intention when "Buried in the snow, my body, dead and cold" is being croak-growled at you every chorus, and the simplicity of them is certainly in line with everything else presented on this demo. I think my problem stems from the fact that every other aspect of Aythya feels so distinctly foreign, so strange, so faraway, that the sudden familiarity of hearing the English language becomes stark and jarring. It may just be personal preference, but I feel that something more obscure (modern Finnish, some ancient language, hell, something made up) would've been much more fitting even if used to express the same basic concepts.

Honestly, I started this review out with the intent of giving the demo a 'very good' 8, but having spent the last hour or two listening to it and writing this review, I think I've convinced myself it deserves even better than that. The Forest In The Shadows Unknown is a collection of stories about cruel, lonely deaths, and it's hard to imagine a better execution of such a theme. The quality of this release has already marked Aythya as one of my favourite hidden gems of metal's melodic extremes, and his well of previous releases brims with promise - I plan to spend some time getting acquainted with those, and in the meantime here's hoping that the mastermind behind the project continues to grace us with his unique music.