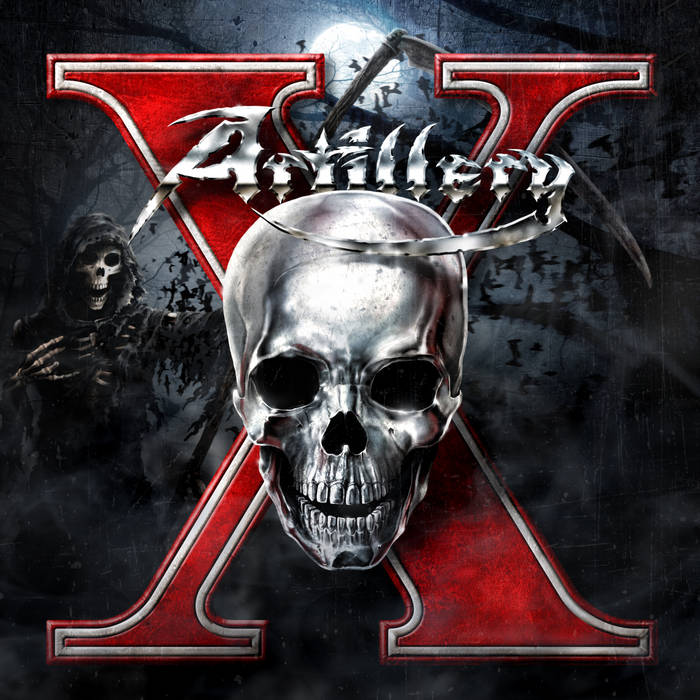 Buy on: Bandcamp
Type: Full-Length
Release Date: May 7th, 2021
Label: Metal Blade Records
Genre: Thrash
1 The Devil's Symphony
2 In Thrash We Trust
3 Turn Up The Rage
4 Silver Cross
5 In Your Mind
6 The Ghost Of Me
7 Force Of Indifference
8 Varg I Veum
9 Mors Ontologica
10 Eternal Night
11 Beggars In Black Suits
MetalBite on YouTube

With X, an institution returns whose name has a thunderous resonance like a, ahem, cannon shot. Artillery, active for almost 40 years, have grown on me. Not every release from the house of the gunners has convinced me, but with Fear Of Tomorrow and especially Terror Squad they have laid a foundation stone that secures them my lifelong sympathy. Especially since later works like Penalty By Perception were also very strong. With X, however, the Danish five-piece refers, not entirely unexpectedly, to their best-known and probably most commercially successful work. We are talking about By Inheritance. The intro to the opener automatically transports the listener to the train to Tashkent with the linen-wrapped Khomaniac before his eyes. 'Varg I Veum' and 'Silver Cross' also offer an oriental touch and surprisingly, it still fits well with Artillery, even though Denmark is not in the Orient as far as I know. But probably my map is just lying.

Even though it's a bit of a shame that the rabid times that produced immortal classics like 'The Challenge' or 'At War With Science' are definitely over, Artillery still have crunchy thrashers in their programme. A song title like 'In Thrash We Trust' leaves no questions unanswered, and it's fast, snappy and yet elegant and polished (in a positive sense) at all times. Titles like 'Mors Ontologica' or 'Force Of Indifference' are no different. Although Michael Stützer looks like a grandfather who has fallen out of time and is accidentally wearing his chubby grandson's clothes, and although the other Michael sings as clear as a bell, as if he wanted to keep his past as a precentor in the church choir alive, Artillery are still a pretty flawless thrash formation. The melodic note rarely takes over. Instead, it is impressive how compact the band is, how well they harmonise with each other and with what a high degree of musical eloquence they fire their eleven bullets. It should not need to be mentioned that the production of the record is close to perfection. Transparent, clean and yet direct and hard as steel, this is how X drills into the auditory canals. It almost seems to me as if the band and producer Anderson want to show off a little bit with this perfectly balanced, absolutely excellent sound.

I am positively surprised that not a single stinker has crept in among the eleven songs. Whoever can find a footballer of equal strength for each of these songs will easily qualify for the Champions League. X is not one of those products whose quality tends to decline the longer you listen to them. 'Eternal Night' may be unspectacular, but it is coherent, substantial and simple but good. It is surpassed by the vivid finale called 'Beggars In Black Suits', in which Artillery once again prove that high speed can be combined well with melody and a relatively catchy chorus. Michael Stützer must feel a really deep passion for his music that he can still spread such energetic vibes with his colleagues after about 40 years. Morten (R.I.P.) will take note of it in his hopefully cosy place in the afterlife with a high degree of goodwill. As understandable as it is, Michael briefly thought of having his brother's funeral followed by his band's - what luck that he didn't. X grows with each new attempt and reaches the lofty heights of Penalty By Perception thanks to outstanding numbers like 'In Thrash We Trust' (deadly torpedo with an earworm chorus), 'In Your Mind' (scratchy, somewhat unwieldy guitars in the verse, greatly flowing chorus, 'Force Of Indifference' (the album’s most vehement song with the sharpest riffing) or 'Mors Ontologica' (another neckbreaker). Even the comparatively calm 'The Ghost Of Me' is convincing in view of its smooth melody.

So what is left to say? I could speak about the pretty intelligent lyrics that are far away from the stupid lines some overly misanthropic musicians like to deliver. Or I could mention the brilliant snare drum sound to pick out the best element of the immaculate mix. Finally, I could make my guess that Artillery's next four albums will be called "I", "L", "E" and "F", which would make a nice "satanic" backwards message. But well, probably everything is said and done. Denmark does not have thousands of relevant bands, but with Mercyful Fate and D.A.D. they cover occult metal as well as party rock. And Artillery is the Danish trump card in terms of thrash metal. Looks like this card still works excellently.