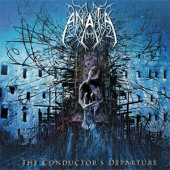 The conductor of our wonderful tech death revival's departure continues to be greatly missed. Of course, that conductor would be Anata, who burst onto the scene with their debut in 1998, before the lot of Psycroptic, Necrophagist and Spawn of Possession were able to drop a debut. I don't remember much of Anata's early days (I honestly have not listened to their second album even once), but none of their previous performances have stood out as much to me as their grand finale, the aptly named "The Conductor's Departure," which saw the band at their absolute peak. Released in 2006, the band's "departure" album is just one of those unbeatable classics - up there for sure with works like Necrophagist's "Epitaph," Spawn of Possession's "Incurso'' and The Faceless' "Planetary Duality." This is truly a very special technical death metal album.

Anata is one of those bands that, while many bands have definitely taken a page from their book, nobody sounds exactly like them. They have a pretty hard style to copy. They're a weird mashup between Gothenburg melodic death metal, Gorguts-style dissonant death metal and some neoclassical influences that bring to mind names like Necrophagist, Quo Vadis and fellow countrymates Spawn of Possession. Their twisted, technical style is rooted more in its incredibly detailed and well planned melodies more than their riffs. The riffs are average, nothing too special in this department, but they definitely have some heavy as fuck ones that will surely make you headbang. The leads are the name of the game here - "The Conductor's Departure" is loaded with magnificent neoclassical melodies that make for some truly breathtaking songs.

The band's ability to infuse multiple melodies with one another at the same time is often overlooked. Anata, in their prime, were kings of counterpoint. Nobody was able to mesh together such gorgeous melodies like they were able to, and even to this day they stand tall as one of the kings of such musical composition. The dark, melancholic leads that litter multiple songs on this album are enough to transport the listener into a new world. I'd say that later atmospheric tech death bands such as Fallujah were listening to a lot of Anata during the writing of their own music. Anata's sound bleeds into other bands so much, yet again, no one has been able to replicate what they did so well back in 2006. It's a very eerie and mysterious journey that this album creates. I still to this day have not found a technical death metal album that evokes the same emotions as this one does.

The drumming is excellent on this album. Lots of good fills and just straight up good use of a drumkit. There's crazy blastbeats of course, but the drummer knows when to take it down a notch and follow the lead of the string section and create a more atmospheric feeling with his drumming. The bass plays a prominent role, as it thunders along under the guitars and occasionally has its moments to shine above the guitars. The guitars are, of course, the album's main focus - the guitar work is superb and the leads are unparalleled, which makes up for the fairly average riffing.

The vocals are standard. He has some good highs, but other than that, you could've put anyone in this position and they would have done just as good. The production is good. Don't care to say anything more about it.

And so, the departure has been seen. For all the hype a possible reunion of Spawn of Possession or Necrophagist gets, Anata seems to get none of that. But the reality of it is simple; we may never see Anata return. If this truly is their swansong, what a way to end their career. This album is one of the most important and greatest technical death metal albums ever. Everything about it is awesome and this is certainly a must listen for any fan of technical death metal. Perhaps not as talked about as an album like "Epitaph" or "Cosmogenesis," but just as important. Godspeed, soldiers. May your music live on forever.