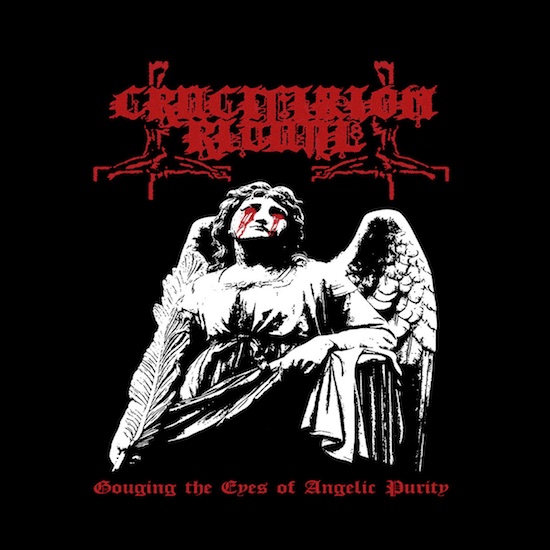 A raw and rabid blend of death/war metal forms the primitive order of barbarity expressed on Crucifixion Ritual's debut release, Gouging The Eyes Of Angelic Purity. Lawless and blasphemous are the 3 hymns barked from the mouth of the vessel carrying out the act. The sounds we know all too well, but the value lies within the sincerity of the clanging.

On a vicious onslaught, Gouging The Eyes Of Angelic Purity, a 'Ritual Bludgeoning' indeed, a constant beating that would last for only so long before the final breath is extinguished. Split into 3 sessions, this record is effective in both its primal display of violence and its ceremonial conjuration. A good mix of the physical and the psychological or philosophical. More loosely put, simplified early Archgoat (Angelcunt) with a very cloudy production value.

Vocals are of the death metal type with the occasional snarl added in and the guitars create a disoriented atmosphere while delivering some savage riff sections. As referenced earlier, the drums are simple and that's how you'd want them to be for something this sort, though you would be able to detect some fairly catchy moments once merged with the guitar leads.

Hence in total, this undertaking appears to be a genuine one that may birth greater material in time.