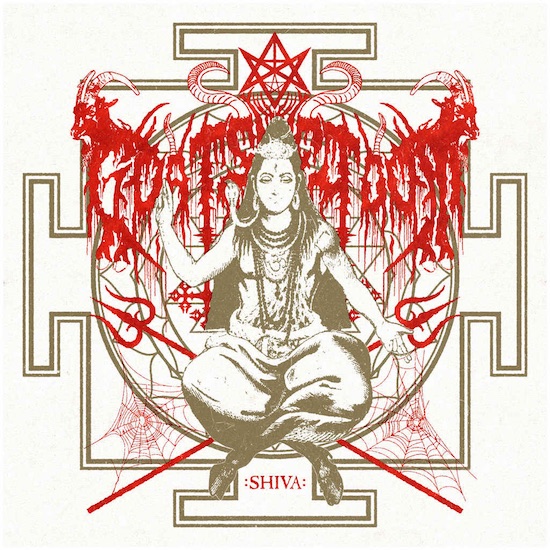 The modern Finnish black metal scene is an odd beast in the age of "blackgaze" and dissonant Avant-garde black metal. A lot of the newer Finnish bands go the primitive route, others down the more polished route, and in today's case, Goats Of Doom went in a very punkish route, for their sixth full length Shiva, to be released through Purity Through Fire.

Goats Of Doom is a fairly recent band, that has been very prolific and has also had a surprisingly unique evolution since, starting as a Lovecraft and Thelema angle in their lyrics for a blend of blackened death, to slowly but surely going on a more heathen route, where the music became more raw, but also much more melodic, and also incorporating folkish and punk elements to their music, that was the case with their previous record Tie on hänen omilleen (as well as their splits with Iku-Turso and Sarastus). For Shiva, the band have both doubled down and even perfected their blend of punkish black metal with folk elements, and now delving into Hindu mysticism with their heathen edge. What most will notice about this record from the get go is how insanely catchy and groovy it is, the guitars dominate the music through some insanely good riffs, harsh melodies, and some of the best hard rock and punk solo guitar work I've ever heard in a black metal record, and that's saying something.

The vocal work is also a major standout. Aside from the blood chilling shrieks and howls founder Scaregod has always excelled at, alongside second vocalist A.H. give the music that mandatory edge and grit that all good black metal has, but the two vocalists, with backup from guitarist T.T. and bassist T.R., they've also continued branching with clean vocals and some ritualistic chanting, which gives the music that air of mystique, which is also boosted by the folk instrumentation for effect to the overall atmosphere. Furthermore, the drumming by R.P. is also excellent, since his quite proficient and dynamic drumming go hand in hand with the band's more sprawling approach for the music, the music having such a clear rock and punk influence needed more than just blast beats (which are present and are used effectively), and R.P. does his part with style and precision.

Overall, it's clear Goats Of Doom have fully reinvented themselves and found their own unique voice, which is some of the highest praise one can give any black metal band given how homogenized a lot of bands tend to be. But and speaking about homogeny, the one and only major issue that keeps this record from being practically perfect is how uniform all the songs are, almost to the point where it feels like one single song divided in 7 parts. Since I don't speak Finnish I can't say if that was the intention or if this is a concept album, but while the experience is enjoyable, and the band performs with such style and infectious passion, on repeated listens the album does feel a tad too repetitive. To the band's credit, they manage to break the monotony in the last 2 tracks which are by far the absolute best alongside the opening 2 songs, and it bears mentioning that the homogeneity is only a real problem on repeated listens, because as a whole this is still a refreshing and extremely enjoyable album, taking cues from a wellspring of influences, and twisting them to make a truly worthy tribute to Shiva the Destroyer.