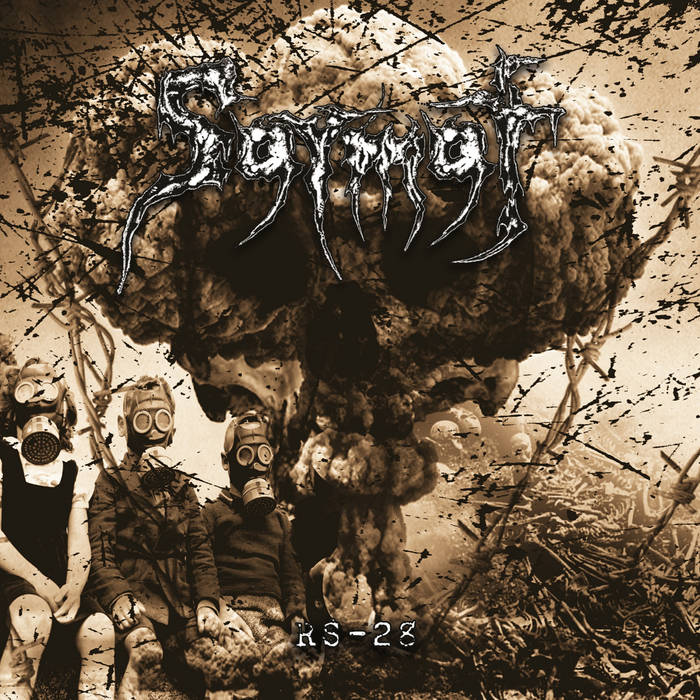 RS-28 Sarmat (also called Satan 2) is to become the new intercontinental missile of the Russian Armed Forces and is capable of unbelievable devastation. It can't be intercepted by any defense systems and should be able to reach any point on Earth. The Polish band Sarmat has named itself after this new weapon and the album is called RS-28. It is also the debut of the band, which I did not have on my metallic radar before.

Musically, the trio presents us with a solid mix of death and black metal in which you can clearly recognize its country of origin. While listening to RS-28 I had thoughts about their compatriots from Behemoth or even Hate (older) several times.

Album starts with 'Coldgrinder', a pretty fast song full of blast beats and repetitive riffs but it’s when the vocals kick in, it makes everything fits pretty well (at first). What makes the song a bit exhausting are the slightly dissonant parts, and that the song repeats itself instead of developing. Similar with 'Evilution' also but here the band could have made much more out of the song. 'The Shining Of Oneiros' is much better structured and knows how to convince with some riffs, even if the structures of the song remind me of Behemoth at "Demigod" times. Here as well as in the title track the tempo changes are built in, which lets those two songs not appear too monotone. 'Seeds Of Uncertainty' starts with an interesting instrumental part and develops into the best track on the album as the song progresses. Frenzied guitar parts mix with slightly dissonant, very catchy melodies that can definitely convince. I'd like more of it next time!!! The last tracks behave similarly to the songs at the beginning. Here, too, the melody arcs are repeated very often and there is only rarely an attempt to break out of the created musical framework. So, the two tracks 'Blackout (Scenario For Tomorrow) Part I' and 'Blackout (Scenario For Tomorrow) Part II' sound quite similar and I honestly don't know if they did themselves a big favor with that.

I don't want to call this album a total failure or something like that, but three Sarmat guys should have maybe paid more attention to variety in the songs. RS-28 seems to be technically very well performed, but I personally miss more creativity here and that certain something that distinguishes the band from others. In the mentioned songs I definitely see the potential for more, but for that they should perhaps detach themselves a little more from the great role models.

Apart from that, the production of the album (which the band released on their own by the way), is very powerful and clean. The booklet is also very thoughtfully designed, so that one can also say quite positive things about it here.

Whoever, as already mentioned above, goes for older Behemoth, Hate and etc. will certainly not be disappointed here, but Sarmat definitely still has room for improvement! If the Russian intercontinental missile is so dangerous, then NATO should be able to lean back calmly, at least until the next time.