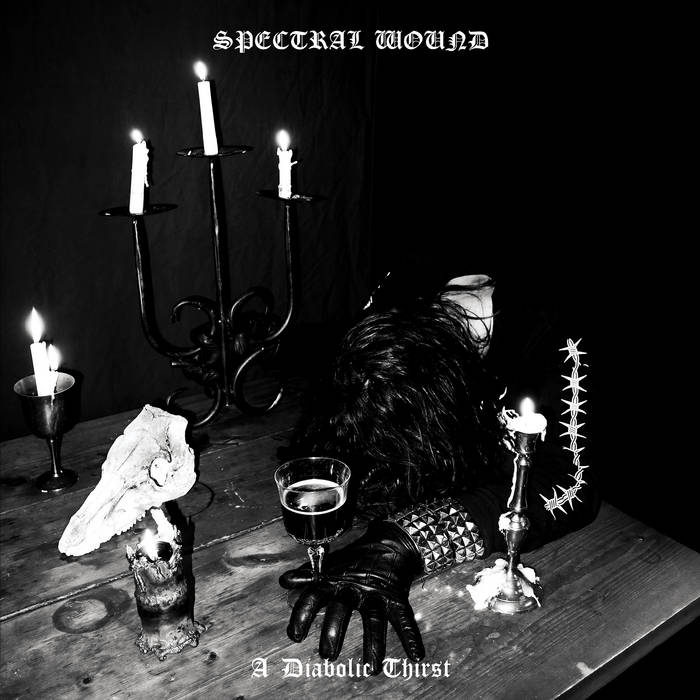 The Quebec black metal scene is something of a secret in tongues for metalheads worldwide, not many know about it, but those who do, speak of it in a very high regard. Names such as Monarque, Sorcier Des Glaces and Forteresse being among its most well-known names, but there’s also Spectral Wound and they’ve unleashed their third album A Diabolic Thrist through Profound Lore Records.

Spectral Wound caught a number of people’s attention back in 2018 with their sophomore record Infernal Decadence in which the band displayed their frostbitten riffs and haunting melodies, which in itself was a refinement of their debut Terra Nullius. A number of people say that the second and third album for a band are what makes it breaks it and by record #3, the band should be able to have the best elements of their previous work perfected or take a new direction in their music. Spectral Wound definitely did both and with great success.

Most of the people familiar with “Quebecois Metal Noir” will describe it as being melodic and sorrowful, with some elements of the French sound or taking influence from Finland and Sweden, and that’s certainly is the case for Spectral Wound. At first glance one can hear some similarities to bands like Sargeist and Dissection, however, in A Diabolic Thirst the band have completely stepped out of the shadows of their influences and found their own voice, so much so that the only major issues with the record basically amount to nitpicking like being similar in style and atmosphere to their previous record. They're not really reinventing the wheel of black metal here, but the music is played with much passion and dedication, the production is as perfectly gritty and polished, and the overall experience is so good that those issues can be easily overlooked.

One compliment I’ll give the band with this record, is that the music feels like if the bands of “Les Légions Noires” from France back in the 90’s had access to better recording equipment. This is definitely melodic black metal, and the band proudly embrace the Quebec sound, but there’s a somber melancholy and desperation in the music, particularly through the guitar playing and the anguished screeches of front man Jonah. That overall feel the band is displaying is very reminiscent of that particular sound the Black Legions had, but again with much better production and also, much better musicianship and without going into cheesy vampiric shenanigans or having to flirt with dungeon synth music to create ambiance.

Another major positive I can highlight are individual standout tracks like 'Soul Destroying Black Debauchery', 'Fair Lucifer, Sad Relic' and the epic 'Mausoleal Drift'. In those tracks and throughout the album the band simultaneously displays speed, mid-pace doom and gloom, aggression, sorrow, desperation and occult mystique, all in a compact runtime of 40 minutes. The mark of a great band with great music is how much they can accomplish in a short amount of time and Spectral Wound are certainly a great band that fans of dark music will enjoy.