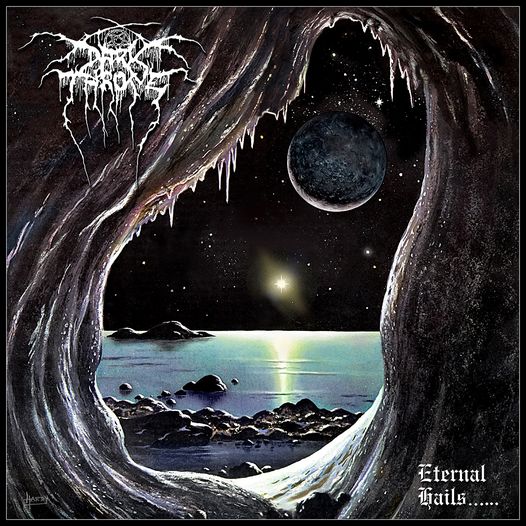 Those who know Darkthrone know that the (un)likeable duo hasn't given a damn about trends or demarcations in genres in the last twenty years, and likewise whether fans like their music or not. When I think of the black metal punk album trilogy consisting of F.O.A.D., Dark Thrones And Black Flags and Circle The Wagons, I can't really enjoy it even in retrospect, but much more the three follow-ups, which convinced me much more. Especially the super epic ‘Leave No Cross Unturned’ from The Underground Resistance I still find mega cool, pure Celtic Frost worship.

The new album Eternal Hails... on the other hand makes it a bit more difficult for me to be completely enthusiastic from the start. On one hand, this is due to the sound, which comes across very diffuse and mushy and initially made me wonder if this is only the case with the promo, but no, the regular CD also sounds like that. Another proof of how much Nocturno Culto and Fenriz shit on any trend and do their thing.

But not only the sound takes some getting used to, also the songs have it in them. The two have probably relaxed very often in the lockdown and let it go pretty quiet, because with the pace that is offered here, Darkthrone rush ̶Go̶̶d̶ Satan knows nothing. Eternal Hails... is a pretty doomy affair and so tribute is paid here especially to bands like Black Sabbath, Trouble or Saint Vitus. But also, the usual Celtic Frost homage is incorporated here and there, but rather in slow motion. ‘Wake Of The Awakened’ would be the number one tip for it. The gentlemen get a bit more hectic here in what concerns the tempo of the song but also only in parts reminds us that we are here to relax. Also, the playing time of the songs is strikingly long. Each song lasts at least 7 (or over!) minutes, so nothing for people who don't like long songs. With ‘Voyage To A North Pole Adrift’ (what a cool song title!!!) Darkthrone offer us an incredibly bulky song, where you expect that it will pick up speed at any time only to be disappointed at the end. But that's what makes this song, this tension that it spreads, only to be completely different than expected. Last but not least, we get to enjoy some 70s rock meets Black Sabbath in the usual Darkthrone ambience with ‘Lost Arcane City of Uppakra’, which ends the album with slightly psychedelic tones. Here is where Darkthrone have then still managed to really surprise me!!!

What is the conclusion now, you might ask? Well, that's not so easy to say. I think that with Eternal Hails... Darkthrone will have a hard time winning new fans, but the way I see it, they can safely do without them. I also think that the album will have some fans scratch their heads because it has become a not so accessible piece of music. But and this is my humble opinion, if you deal with the 19th studio work of the band more intensively, you will definitely find access to the album and also learn to appreciate it. At least that's how I feel. Although it does not come close to the old albums (that will also be very difficult) and my favorite album Panzerfaust remains forever unsurpassed, it is also not a disappointment. I think everyone has to listen to the album to make up his own mind about it and make a judgement.

Yes, it is true. The integrity and passion of Darkthrone cannot be doubted. Eternal Hails...... represents their 19th studio album, Fenriz can sing every single track of every metal demo of the seventies and eighties by heart (presumably even of those demos that were never recorded) and the repeatedly flaunted, by objective standards flawed sound of their records also speaks a clear, anti-commercial language. Eternal Hails (I'll leave out the stupid dots from now on) also doesn't give a damn about modern sound technology. The five tracks appear unpolished and honest. In terms of production, they fit quite seamlessly into the discography of comrades Fenriz and Nocturno Culto.

And yes, it's also true: Darkthrone have proven that they can successfully tread different compositional paths. One cannot argue about the force and class of Transilvanian Hunger, the grandiose flow of the songs of Ravishing Grimness refuses to lose luster, the spontaneity and simplicity of the tracks of The Cult Is Alive is still a joy 15 years later. But for some time now, Darkthrone have not remembered their own class. Instead, they seem to find fulfilment in a new role. The band stages itself as the preservers of "true metal". The aim seems to be to include as many cross-references as possible to semi-legendary or even non-legendary bands in the songs. The result is a boring number like 'Hate Cloak'. Well, thank you, my ears would have been better off investing the nine minutes of their lives elsewhere.

Because no, it's not true: the reputation, the fame and the radiance of Darkthrone is not based on sluggish, dragging along in doom "tempo", overlong songs and certainly not on spherical sounds. If you like the tired, not very energetic beginning of 'Voyage To A Northpole Adrift', your heart might have fluttered when you looked into an empty football stadium in the last few months. And it's not just the first tacts of this piece that leave me perplexed. Apart from the one or other acceptable speed part, this track, just like 'Hate Cloak', makes it painfully clear that a friend of mine was not wrong when he described the music on Eternal Hails as a big nothing. Sure, individual parts of 'Voyage...' are quite catchy, but a coherent overall picture does not emerge for me. Most sections are going nowhere and leave no impact. Maybe there are trace elements of Sabbath, Frost, Manilla Road or whoever to find, but who likes to identify them one by one when they are hidden in boring tracks? Nobody.

Because yes, in the end it's true: no one, not even the most ardent follower of the Norwegian duo will tattoo the words Eternal Hails on their soul (not to mention the stupid dots). Either it already says Transilvanian Hunger, Panzerfaust or, for my sake, A Blaze In The Northern Sky - or the soul simply remains unsullied. There is - and this is of course too few - exactly one song that I really like. 'Wake Of The Awakened' sounds like a forgotten leftover from Ravishing Grimness. Great guitar lines let the song flow very well. The title has an energetic fundament, it does not lack different parts and moods and shows that the raw vocals ask for rather aggressive, speedy tracks.

Finally, yes, it is true: a lot of bands find their point of orientation in the eighties and usually that’s acceptable. The eighties, the golden eighties, my God! (By the way, I want to be young again, just for one week. Is this possible?) But Darkthrone seem to be on a quasi-religious mission in order to make us familiar with all (old) facets of metal. I am sorry, I don’t request for a higher sense in music, I just want to hear tones that trigger something in me. Fenriz can play the well appreciated metal professor and he can be a great artist – however, he cannot fill both roles simultaneously. Darkthrone should no longer produce records with the strangest sounds they can create, but focus on the songs again, keeping them compact, impulsive and straight. Their weird side can be covered by the artworks – the one of Eternal Hails looks fantastic, However, I hope the 20th album will be much better.