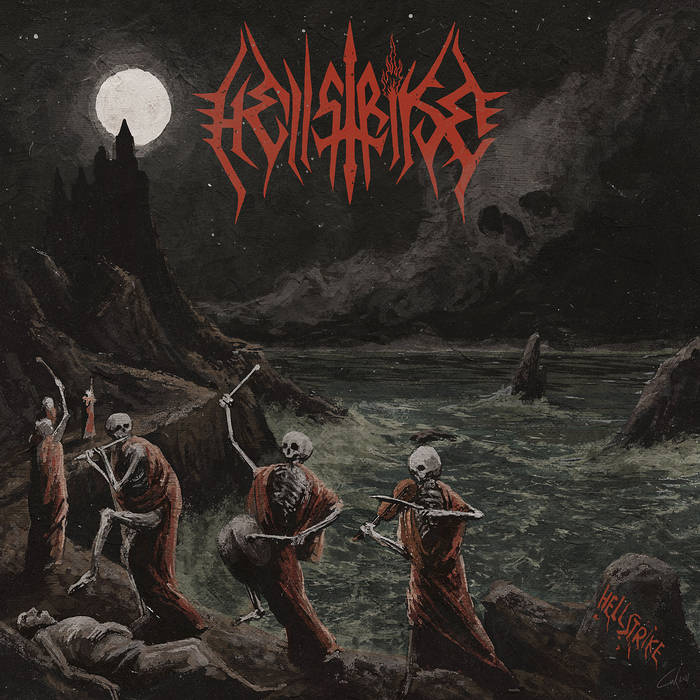 It would have to be nearly impossible to turn a blind eye to Hell Strike after finding out the band shared members with Ritual Necromancy, Ascended Dead and Bloodsoaked. Knowing what those bands have accomplished in the span of time they’ve been active then finding out that their members would be putting together a new project is a thing to celebrate especially as we approach the season of death metal. What they execute very well is play black/death metal with the inclusion of strong rhythms, technical flare and sublime segues throughout the self titled EP.

Drums, riffs and vocals combine to create an ear-quake of stone heavy metal that grip you from the first note played as they assault you with textbook structured black/death metal. Even while being a few entries, the music composed will raise eyebrows within the underground and hopefully be the catalyst to some other great collaboration to manifest within the subgenre of underground bands. Musically, the EP showcases black/death metal but also saves a few tricks and surprises to prevent the run of the mill tag. The riffs are bold and remorseless, they seem to want to dominate all sections of any given track while the vocals go from soaring roars to phrased barks. The drumming is interesting, you’ll find many times they appear to be playing the rhythm of the lead guitars which is impressive and adds to the punctuation of the overall music.

Hell Strike is relatively short (its an EP after all), however its filled with memorable moments such as the technical synchronicity on the drum-kit and guitars that segue into semi-melodic passages on 'Re-Abortion' and 'First Born Of Fire' while traversing mid paced grooves of traditional heavy metal, doom metal, black metal and old school death metal. Mostly aggressive but can also be mournful with a song such as 'Transylvanian Funeral' that adds more texture to the already dynamic approach of the musicianship.

Evidently a neatly assembled album and sounds very professional as one would imagine coming from members of aforementioned bands; thus said, don’t be surprised if Hell Strike evolves into a more committed project.