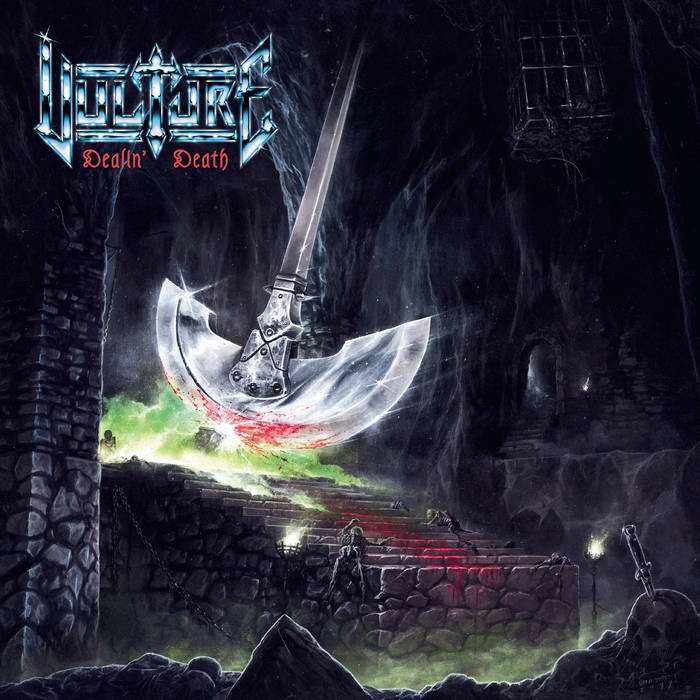 It may be that Vulture are a bright star in the speed metal sky for some people in the German metal journalists. It may also be that I just can't recognise the quality of their music. To me, it all sounds like relatively calculated speed or traditional heavy metal that has been heard a thousand times before and of course offers all the antics of this style. For example, there are some shrill, high-pitched screams, supporting background vocals (which sound extremely bland and expressionless here), scratchy guitars and choruses that are more or less trimmed for catchiness. Everything suffers from predictability, nothing is really heavy, rebellious or raw.

The first song that actually shows a certain sharpness is 'Flee the Phantom'. At this point, however, half of the record is already over. Moreover, despite its biting nature, this track also doesn't quite manage without a short melodic solo and, worse, the solid chorus isn't able to crown the piece. Unfortunately, not a single track convinces me at all, everywhere mediocrity rules with an iron fist. Of course, one can enjoy the transparent, relatively warm sound of the album. The production does justice to the band's style and their very backward-looking attitude. Unfortunately, this doesn't make solos great that would have already been considered antiquated in the days of the NWOBHM. Thus, for example, 'Below The Mausoleum' presents nothing but cultivated boredom despite minimal Mercyful Fate echoes. In the end, it's naturally all a question of taste and I don't want to be unfair. Everything is certainly right here in terms of craftsmanship. The band seems to be well attuned to each other, compositionally they also avoid putting together song fragments that don't belong to each other and for fans of the riff-emphasised but still melodic direction this may all be okay.

Towards the end of the album, Vulture make us sit up and take notice. While their songs otherwise hardly appeal to me and have little to no atmosphere, the restrained beginning of 'Multitude Of Terror' briefly creates a somewhat haunting atmosphere. Even when the song turns into a typical headbanger, there is no loss of quality and at least a level is reached that is not light years away from the last Iron Angel album. The closing 'The Court Of Caligula' also raises the final score thanks to its good melody in the chorus, but that's not so hard... In short, it is not forbidden to refer to the 80s. It's even much better than some modern nonsense. But without the extravagance of bands like early Agent Steel or Nasty Savage and beyond the compositional class of Paradox or Flotsam and Jetsam at the beginning of their career everything remains just as interchangeable as the clichéd cover. Therefore this work is recommended only for people who want to be eaten by vultures soon anyway.

German speed metallers Vulture from the tranquil town of Detmold (or as they called it in the booklet of their previous release - Deadmold, fantastic pun!!) will soon release their third opus Dealin' Death on Metal Blade Records.

First of all, once again very gloomy cover impresses, and again emphasizes the quintet's penchant for cutting weapons of any form. I would like to take a look at the kitchens of these gentlemen. The whole thing is based on the film "The Pit and the Pendulum" with Vincent Price based on the short story by Edgar Allan Poe. Visually definitely worthwhile.

Musically, at first glance (better the first listen) not much seems to have changed compared to the two strong previous albums. After a short intro 'Malicious Souls' and 'Count Your Blessings' start with aggressive speed riff attacks and pummeling drums, but in the course of the songs you notice that the band is much more playful and melodic than before. By the way, in 'Malicious Souls' the band also bows to Johannes Brahms very briefly - cool riffs from the "Hungarian Dance No.5". The first remarkable change can be discovered in 'Gorgon', which surprises the listener with a piano intermezzo and very varied vocals. Here, NWOBHM influences sound through in the chorus, which were not yet recognizable on the last albums. 'Star-Crossed City' starts with a cool riff and remains a very catchy song in the further course. 'Below The Mausoleum' is another very casual song in which the band uses some lunatic guitar riffs and very melodic vocal lines. In 'Multitudes Of Terror', on the other hand, the band again and again shows Slayer influences, without renouncing their typical speed metal. 'The Court Of Caligula' is by far the slowest song on the album, again with a melodically sung chorus and hypnotic drums (I can't think of which band the drumming reminds me of, who knows what I mean, please message me!!!)- very catchy and the riffs keep reminding of Iron Maiden. A quite worthy conclusion of a good album.

Who stands on speed metal with high vocals (as a reference Exodus, old Agent Steel, Exciter or Evil Invaders are mentioned) should definitely check out this album.