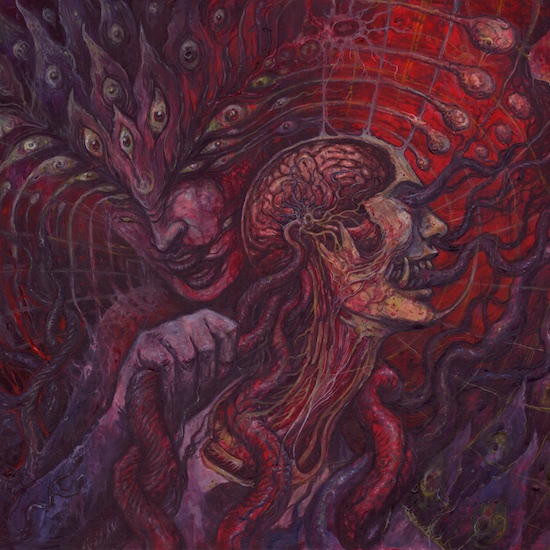 In 2021 a lot of metalheads are probably sick of death metal, no thanks to the surge of revivalists. In what seemed like a dominant trend, there were a large number of really good bands, great ones even (Blood Incantation, Necrot, Tomb Mold), but after so many records of bands that stuck to the formula, death metal seems to, once again, have fallen into stagnation. However, and in spite of the OSDM worship, the underground has been stirring and many bands delve into experimental extremes (Portal) or double down on the darkness and evilness (Dead Congregation), and speaking of experimental and evil death metal, today we have a filthy eldritch entity out of the UK known as Qrixkuor, who in August of 2021 will unleash their long overdue debut LP Poison Palinopsia through Dark Descent Records and Invictus Productions.

Qrixkuor is what can be described as "death metal", but that label frankly limits what they're capable of with their music. Originally founded in 2011 by guitarist S. the band caused quite a stir thanks to their 2016 EP Three Devils Dance, which displayed the band's utterly chaotic and depraved music. Five years later, the band continues to display that overwhelming and impenetrable sound.

Poison Palinopsia, is by far one of the most extreme and inaccessible death metal records I've ever come across, which is why I think labeling Qrixkuor as death metal is a disservice to their music, primarily because on a technical level and performance wise, this record is all over the place. This is noticeable from the get go by just looking at the track list; two 24 minute songs and a 48 minute runtime, this is what will break most people since beyond the ominous atmospheric passages in both tracks, when the guitars, bass, drums and vocals hit, it becomes an endurance test. What surprised me the most however, is how while the music is completely unhinged and dissonant, there's an actual method to the madness, because those 24 minute lengths actually amount to two distinct experiences that are cohesive, have a consistent pacing and never feel disjointed or haphazardly cobbled together. It's rare for any band to come up with songs this bloated but making them interesting from beginning to end and without feeling as if the band stitched a bunch of songs together. With that said, don't expect this album to be a swift ride, it is a nightmarish and all-consuming void. This is the type of extreme metal that goes beyond labels and trends, and it is meant to push people away through its transgressive sound and overall feel. In other words, either you're in for the ride, or leave, because this record doesn't and won't ease you into its groove, there is no groove, it's a leap into the abyss and you better be ready to drown in its darkness.

Going into the actual instrumentation, it goes without saying that band leader S. is a masterclass guitarist. The riffage and shredding is hard to pick up at first, but it's never unlistenable, and it isn't some aimless guitar virtuoso noodling either. S.'s prowess as a guitarist is how he's able to use speed, force and technicality seamlessly, and with the help of VK of Vassafor fame on bass, and DBH of Grave Miasma on drums they succeed in creating their cacophony of infernal lunacy, which is furthered proved by S.'s death growls where he completely sheds his humanity and becomes the voice of the abyss for lack of a better term. It is rare for any vocalist in extreme metal to sound inhuman, but S. succeeded. It's hard to get into more specifics in regards to the instrumentation because everything blends together, that melding of the instruments is what gives this record it's cavernous depth, and that's actually the key aspect that the band with the help of their producer Greg Chandler of Esoteric accomplished and what makes this record so impenetrable. The sense of sonic depth, the massive and overwhelming feeling of not listening to music but of being absorbed into hell. I would say that it's almost symphonic in its execution and presentation, but not in a grandiose or cheesy manner, more in terms of how the album is an experience and the instrumental proficiency of the members is just the means by which this record was made. In many ways, it feels like the band filtered drone metal and funeral doom through death metal.

But after going through all of that, does that mean the album is good? Yes, but with the caveat that this is an unwelcoming record that has no intention of bringing new fans or appeal to a specific audience. This is Qrixkuor putting their madness out for whoever is willing to endure it. Which is why, despite thoroughly enjoying the experience, I do have to say that if you're a fan of more standard death metal or if bands like Portal or Dead Congregation are too chaotic for you, then this record and Qrixkuor in general, is most definitely not for you.