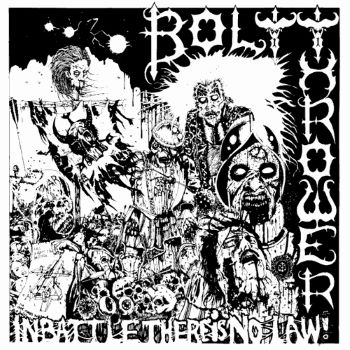 In 1988 a young British band from Coventry set out to conquer the world with their death metal. Thematically, In Battle There Is No Law!, as well as the following albums, is mainly about war. Whether it is due to the fact that the Germans have destroyed Coventry in the Second World War with their bombings, or whether Bolt Thrower have developed such an affinity to war and destruction by other coincidences, I do not like to say.

The cover is pretty unspectacular by Bolt Throwers standards, a drawn 08/15 death metal cover in black and white, but is also "only" the debut and the band's budget was pretty limited. The logo is not yet the one we are used to from them on the following albums, it still looks pretty primitive. The production of the album seems very rough and unpolished. When I listen to the album, I always notice the muddy sound. This may be due to the fact that the production company didn't grant the band much studio time at the time, and the budget wasn't particularly generous either.

The songs all have a somewhat chaotic structure, which was influenced by the hardcore and punk bands of England at that time (Doom, Sore Throat, they were good friends with Napalm Death and Carcass). The Bolt Thrower-typical song structures are already well recognizable in parts ('Nuclear Annihilation' starts similar to 'World Eater'), but you can clearly see that the songwriting talent of the band is still in its infancy. The guitars do have the Bolt Thrower-like riffing, but the drums sound rather bumpy and wooden and Karl's voice sounds deep, but nowhere near as charismatic as on the following albums. The band manages to make the songs sound quite appealing, as many of the song structures are quite catchy, but unfortunately they lapse into quite uncontrolled bludgeoning every now and then. Also the solos sometimes seem a bit too rushed and a bit out of place. But you also have to realize that the band released their debut album before many other bands (for example Morbid Angel, Carcass, Entombed) and at that time there were only a few reference works in death metal ("Scream Bloody Gore"; "Scum"). Thus, the album should always be seen in a historical context. Tracks that point to the further musical development are the title track with a cool spoken words intro and the classic Bolt Thrower characteristics in the further course of the piece. 'Forgotten Existance' shows the already from time to time and flashing ability to write very interesting death metal songs (the solo alone is remarkable) and 'Attack In The Aftermath' I already celebrated off as a young teenager in 1994 because of its brutality.

To sum up, In Battle There Is No Law! is a pretty interesting album if you want to take a closer look at Bolt Throwers' career. If you are not a big fan of the band, you should better listen to the other albums from War Master on, to be taught a better lesson. In Battle There Is No Law! definitely has its right to exist, even if it is not the album I listen to first when I reach for my death metal classics.