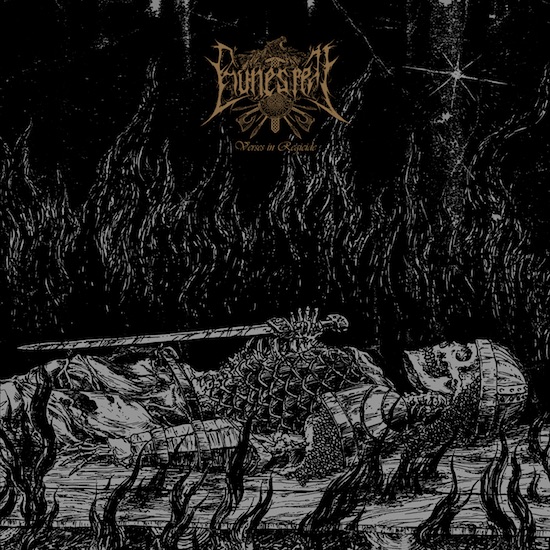 Runespell refuses to disappoint with the latest full-length album titled, Verses In Regicide. All that you have come to love and adore about the project makes a return and is reunited with the listener. The sweeping landscapes of tranquil melody, the capturing vocals of the main man (Nightwolf) behind this black metal project and that feeling of being at peace does not miss its step on Verses In Regicide. Operating with absolute mastery and a clear vision of where he would like to take Runespell, Verses In Regicide is but another piece to the grand architecture.

One of the more appealing factors of Runespell is the mannerism of sound and production maintained up to the current release that echoes of a lo-fi black metal aura. This seems to be one of the reasons that tranquil feeling reemerges as a staple etiquette of this project. Then there is the voice of Nightwolf that utilizes a gasping shout for vocals complimenting and aligning perfectly with the primitive drumming and beautiful mystic landscapes that as a collective, add to the peaceful and solitary atmosphere.

Nighwolf's work is remarkable, it’s only been 4 years since the first recording under Runespell was put out and he's already 4 full lengths and a split EP in. And though you'd think the quantity is a bit over the top especially for a black metal band, the quality of his work overshadows the frequenting output to the point where you'd wish another album were on the horizon in an even shorter period. And if that's not the case, you'd be more likely to hear of an upcoming recording under his other band, Blood Stronghold.

These songs are professionally written and reflect his years of expertise making black metal. The way he's able to mend melodies that project melancholy and triumph, with folk-esque tremolo picking, transcends the hordes of albums within the genre that do nothing or are barely able to surmount an infantile effort. It is made clear with 'Structures Of Collapse', 'Vengeance Reign' and 'Realm Of Fire' that Nightwolf with Verses In Regicide aims to outperform his prior work and by no little margin. Hence the depth in his writing albeit the black metal riffing or the instrumental interludes and intermezzos, shine throughout the album.

His best work in my opinion was on the split conducted with Forest Mysticism titled Wandering Forlorn that was longing to be followed up with similar technics; and here be, Verses In Regicide, an antique in the sea of black metal.