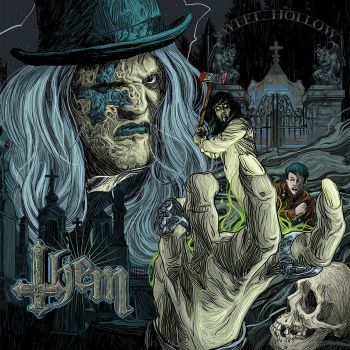 I'm going to have to begin this review with a confession. Even in spite of my undying love for heavy metal and my penchant for overly dramatic, unconventional vocals, before today I had never listened to King Diamond. A combination of the sheer number of names that are touted as "must-hear" bands and my personal philosophy of the most genuine and artistic albums being more likely to be found below the surface leads me to often skip over the bigger bands in a genre and dive straight into the underground. One thing that this practice has made me appreciate more is worship acts like this one for giving me an indicator of which of these bigger names I might be in tune with and should explore further. The question, then, is this: Now that I've heard the original, the artist that Them take inspiration from through and through, does this album still hold up? And unfortunately, after listening through the heavy metal masterpieces that are "Abigail" and "Them", Sweet Hollow feels like a pale, sickly imitation, a rearrangement of the elements present in King Diamond that both focuses in on all the wrong aspects and lacks a rudimentary understanding of why the works that inspire them... well, work.

The beginning of the album actually shows a lot of promise, with the opener 'Forever Burns' setting up an interesting contrast between the frenetic combination of low grunts and high wails seen in King Diamond and more traditional heavy metal singing. Troy's vocals have a very theatrical quality to them and he's able to seamlessly transition from sounding like an evil ringmaster in a twisted circus to a helpless onlooker in the audience of that same show. Keyboards are well-utilised and give the overall tone a touch of cheese, that charming playfulness that traditional heavy metal gives a home. The momentum pretty effortlessly carries through the next couple of tracks until we reach 'The Quiet Room', a two-minute interlude which strips away all instruments but a lonely keyboard and sees the vocals become even more cheesy and overacted. This, sadly, I mark as the point where everything collapses.

You see, King Diamond likes concept albums and horror stories. They're omnipresent in his music, so much so that from my (admittedly limited) perusing of their catalogue they'd seem to be unavoidable, and so it's natural that Them would follow in their wake. So why is it okay for one band to do a corny horror concept album and not the other? Well, the key difference is that while "Abigail" is a concept album, it doesn't force that fact down your throat. If you wish to, you're more than welcome to completely ignore the story and simply enjoy the album for the badass heavy metal riffing and vocals. The second half of Sweet Hollow, however, seems to stop caring about the music entirely and hones in squarely on the storyline - vocals are cut down to make way for narrative segments that add absolutely nothing to the music and a lot of the more interesting singing is replaced with simple, formulaic thrash-style vocal lines. The composition also gets a whole lot more lazy and the music itself is nowhere near creative enough to give the band grounds for it - while "Just at the final moment, I hear her final plea/How could you do this father? How could you hurt me?" is quite a nice rhyming couplet, it's nowhere near good or catchy enough to justify the sheer goddamn number of times it gets repeated in 'When The Clock Struck Twelve', and by the end of the song it's grating and leaves no room for even a remote desire to hear it again. If you're going to try and make a seven-minute epic to close out a heavy metal album, you need to be prepared to do more with it than slap a few narrated sections in and repeat the same verse/chorus' vocal lines again and again ad nauseam with no variation.

To conclude, I would heavily advise against listening to this album. Maybe Them's future work is better and this is nothing more than a case of a shaky debut, but as it stands Sweet Hollow takes King Diamond's sound and combines it with the worst aspects of whatever album comes to mind for you when you think "shitty thrash" and the Carach Angren trainwreck that goes by the name 'This Is No Fairytale'. If there's anyone else like me reading, who stumbled across this band with no knowledge of King Diamond, just go listen to "Abigail" instead. It doesn't drag itself out like this, it's more creative and... well, it's just better in about every possible way. It's hard to justify Sweet Hollow's existence except as an album for absolute King Diamond fanatics who've heard everything from that band and are left craving more... But even then, are you really this desperate?