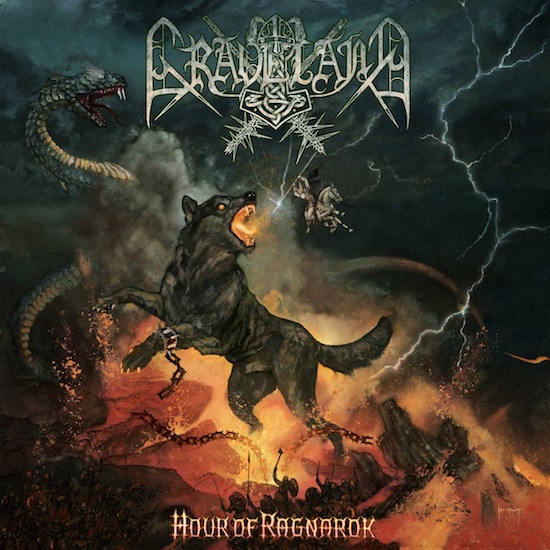 Type: Full-Length
Release Date: August 23rd, 2021
Label: Inferna Profundus Records
Genre: Pagan, Viking
1 The Wolf Of Twilight
2 Hour Of Ragnarok
3 Conspiracy Of The Wizards
4 Children Of Hyperborea
5 Following The Azure Light
6 The Three Gifts Of The Gods
7 Enlighted By The Wisdom Of Runes
8 River Of Tears
MetalBite on YouTube

Consistent and reliable, little experimentation and lots of atmosphere – these terms characterise Rob Darken’s artistic work at the latest since Creed Of Iron. Hour Of Raganarok features two musicians at his side, but the mastermind is still responsible for all important building blocks. He plays guitars and keyboards, he sings and he has written the entire material, music and lyrics. (To speak frankly, I fear the new guys aren’t more important than the two jesters that were represented by Quorthon on “Blood Fire Death”. Hopefully I am wrong!) Either way, Graveland is still Graveland and even some up-tempo sequences do not give the compositions an unexpected aura. Sublime, heavy rhythms, supported by partly fragile, partly powerful keyboards and often with a medieval touch control the sound of the work from the year 2021. This is nothing new, nothing spectacular, but still good, pretty predictable yet never boring. Rob has given the songs a comparatively broad range between pleasant melodies and valiant rage and so Hour Of Ragnarok embraces the listener as tight as it can.

By the way, the album bears a subtitle: “The Twilight Symphony”. That’s a good name, because once again Rob has created an album where all songs contribute to a uniform work. Here we do not have eight songs that happen to form an album, but an album that stands on eight equally strong pillars. Therefore, we can truly speak of a kind of symphony and Graveland do a lot in order to keep the listener engaged. Rob does not even shy away from clear, almost pastoral vocals every now and then ('Children Of Hyperborea'), but he does it without hurting the songs. Given his instinct, it comes as no surprise that he concentrates on his raw nagging in a dark and more or less violent outburst like 'The Three Gifts Of The Gods'. Here Graveland paint a truly sinister scenario – Ragnarok is not just a word, but the program and the motto for the album and especially this tune illustrates this fact.

Honestly, the melodies on this album do not sound very exciting. As mentioned before, they all originate from the same brain and they cannot hide this circumstance. This is not to say that Rob fell victim to self-plagiarism during the creative process. He just has his own style and that’s a fact he has not to be ashamed of. Instead, he can be proud of tracks like the stage-setting opener 'The Wolf Of Twilight' that represents all the pathos, the force, the drama and the fighting spirit of his art. Richard Wagner, sitting on a cloud somewhere over Bayreuth, will surely be impressed about the music of his Polish fellow. For good reason, because Hour Of Ragnarok blends seamlessly into the enormous discography of Graveland. Even after all these years, I still enjoy their new outputs. And the great design of the vinyl makes it even easier to like the full-length, although this “hour” lasts “only” 50 minutes (little joke to finish off, sorry...). Maybe it's just better I call it a day now and we let Rob darken the sun.