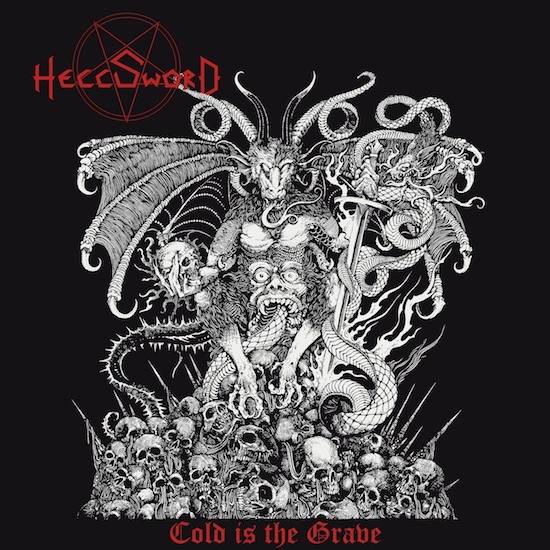 Cold Is The Grave - golden realization! But that's just the beginning with a band that bears the not at all clichéd name Hellsword and adorns their debut with artwork that would fit any black/death combo from a South American slum. This trio here, however, hails from the opposite of a filthy poverty quarter. The three from the hellish sword forge greet from Slovenia, the big, beautiful nature park of the former Tito state (if you disregard the rusty industrial facilities of Jesenice). Anyway, even in a heavenly environment you can apparently be in a constant bad mood and so the band thrashes through nine black/speed bastards. In the promo the author talks about "Slovenia's answer to the first black metal wave". But first of all this answer would come quite late after about 40 years and secondly from my point of view neither the mega-heavy gloominess of Hellhammer nor the chaotic element of early Venom is particularly present here. The hint that Hellsword should please fans of Deströyer 666 I don't really understand either, because the aura of the musical content is quite different. Anyway, Hellsword still make me feel good with their bad mood. A nice paradox, I think - and much better than if it were the other way around.

To my unwashed ears Hellsword sound like a mix of Nifelheim and Baphomet's Blood. This is truly not the worst combination. So, I listen with interest to the fluidly constructed songs, which of course like to make use of some Motörhead riffs of the dirtiest kind. Sometimes this speed rock'n'roll design shimmers through a little too strongly for me, but mostly Hellsword keep things balanced and don't lack the necessary blackness. If you give yourself names like "Mark Massacre", you should just massacre the one or other dogma of harmony theory. The band does that, too, not only poaching in high-speed areas. 'Cursed Blood' doesn't sound like Hellhammer either, but at least has some parts that reanimate "(Beyond the) North Winds" the Celtic frost. Ultimately, the guys from Slovenia do not have to align themselves with any scene greats of bygone days. Their own music does not lack malice, power or energy and the last prize for exceptional originality in the speed/black metal segment was probably awarded around 1995 anyway. In any case, I don't rack my brains over whether I've encountered the chilling riffs somewhere before, but simply enjoy the album's climaxes. 'Unholy Reich', for example, storms straight into my brain and heart, as its rapid elegance, coherent catchiness and natural meanness simply add up to a terrific result.

Hellsword have chosen a stylistic direction that lives from its simplicity. There may be one or the other suspicious whether nine songs with a playing time of 42 minutes do not attract attention with an excess of repetitions. The answer is as simple as the music: no. The Sword of Hell keeps the tracks varied and mostly exciting, for example in the excellent 'Baphomet's Shrine'. No question, the band has a knack for the right number of tempo changes and for relatively catchy choruses. Why the "only" good songs are at the beginning of the record and the killers at the end is beyond me, but it's also a welcome change from 98% of the competition. In short, this is a cool, more or less flawlessly produced debut. And always remember, if you ever get tired of life: Cold Is The Grave.