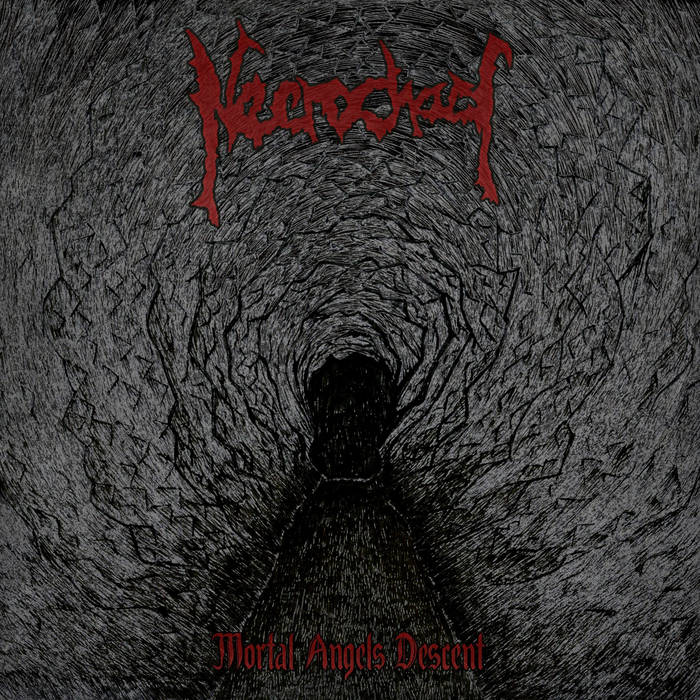 Condemned to a violent domain of lifelessness where damnation is but a thought away, the makeup of Germany's Necrochaos has emerged confidently with a debilitating death metal maneuver that'd plunge you into their realm of confusion. Crushing like the weight of iron on eggshells, yet sparkling with showmanlike riffage, Mortal Angels Descent marks an impressive first full length by Necrochaos to be put out through Godz ov War Productions.

Ornamented with death/doom propulsions, the sound here is a line drawn somewhere between the mentioned genres that'd fluidly pace about with quaking and creaking breakdowns as heard on a track like 'Bloodied Sacred Scriptures' that'd work its way into a groove whilst folding its fists to strike you in the guts with mid 90s era death metal riffing; all the while finding middle ground where rawness and clarity clash via a very deceptive production.

Frenzied tech/death double bass sequences storm from the maniac behind the kit as a toggle of tempoes is inflamed by anguished and intimidating growling, while the guitars pitch it's magic touch with a template of leads providing adequate exclamation, definition and climax to all entries featured on Mortal Angels Descent. Sort of like sitting in a trance only to have your physical stimuli set ablaze and awoken by a sudden bite or sting, 'Last Prayer' and 'Word Of God' or just the totality of Mortal Angels Descent merges blackening atmospheres with an incendiary instrumental assault from start to end.