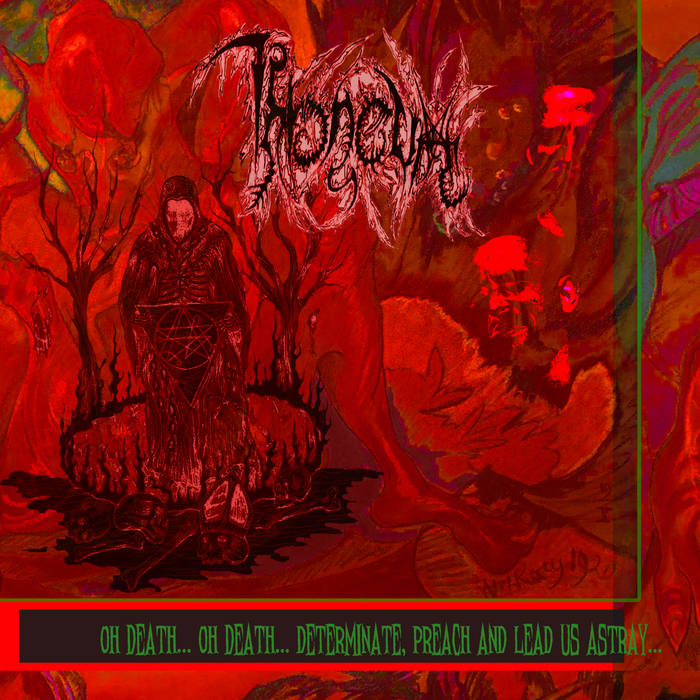 While black metal and its many hybrid subgenres have been around and going strong since the 90’s, it's hard to believe how back in those days, without the internet, bands still managed to pop out with nothing but demo tapes and a spot in some fanzine. Poland being the hotbed of extreme metal it is, has had many such bands, and one of them is the black/death act Throenum, who released their tenth full length record (and ninth overall of brand new material); Oh Death… Oh Death… Determinate, Preach and Lead Us Astray… in 2020 through Godz Ov War Productions.

Throenum, have been around for a while and can well be considered seasoned veterans of the Polish underground. Not being familiar with them myself before this review I figured this most recent record would be a good place to start. That being said, this record was a very interesting surprise, most of it a welcomed surprise. Throenum play blackened death metal, which for a Polish band isn’t surprising, however, this particular record, and the way it surprised me was the length of the songs, as well as the overall performances. You see, the band doesn’t play the style of black/death most today associate with mid to late 2000’s Behemoth or Hate, or even Belphegor, but rather, this is a very old school and downright ritualistic style of black/death that would feel at home in some dungeon.

In very broad technicalities, the band certainly favor the blackened influence, primarily because of how atmospheric and dronning the album is, and this is evident from the song lengths and overall composition; 6 tracks, with are divided between 3 full songs and 3 interludes, totaling 40 minutes in length, and the very first impression is that of opener 'Alpha: Soulside-Space-Stream' and its gargantuan 15 minute length, made even more impenetrable by the dronning, almost DSBM style guitars, albeit with a focus more on dissonant and aggressive riffs drenched in distortion over reverb-doused melodies, and vocals that sound dry and choked, and being performed as if frontman and guitarist The Great Executor is delivering blasphemous sermons. I single out the opening track because it sets up the whole mood of the album and it will pretty much be what makes or breaks the record for many, and that feeling extends the following tracks which are 2 radically different instrumental interludes. And this, I feel is the biggest barrier of entry, over 15 minutes is already a big ask for many, but to then have half of the album just be interludes certainly will rub some people the wrong way, however, I do have to compliment the band for having an uncompromised and unfiltered vision, as this album is one of the most off kilter and unorthodox extreme metal records I’ve heard, the whole 3 songs and interludes being songwriting approach that I would associate more with prog or psychedelic rock.

So, one would think that an album like this would be bloated or even pretentious? That’s really a matter of preference, but for me this is a really good record, regardless of how unorthodox it is. The biggest takeaway will be the band’s blend of sinister atmosphere with sheer brutality, and while I had some critiques of the first track, that’s not to disparage the band’s skills in songwriting and composition, because despite the whole dronning guitars and extended lurching dirges that serve as the song’s bridges, it never feels monotonous or dragged out, since, as soon as the band completes an idea in their passages, they speed up or slow down, they give you enough time to settle in a mood and groove before moving into the next phase. And this is further developed in the fourth and sixth song, with the latter, 'Delta: Self-Appointed-Grandeur' being the best track in the whole album and complete encapsulation of this record, as the band effortlessly weaves death metal style riffing and soloing with black metal, creating a deeply sinister and engrossing experience. The last track, 'Zeta: Archangel-Lucifer-God' while, the shortest (if you wanna call a near 9 minute song short), manages to be a worthy climax for the record, as it employs a mid pace in violent bursts and with crawling low end to emphasize the album ending.

The last aspect I want to highlight and what makes this record great, is the entire experience and vibe the album sets out to do, the prog rock comparison I made early wasn’t only in reference to the song lengths and compositions, but also the instrumentation and use of ambiance. The band play around with their instruments in a very bizarre way, in many areas they stop playing riffs altogether and instead play dissonant notes, or, as is the case of the interludes, bring in synths and keyboards to create a sense of dread. The overall atmosphere they create is not just of blasphemy and devilry, but also of the vastness and darkness of space, as if Satan is waiting beyond the stars to consume the world in darkness. It really feels like this record will darken your surroundings and suffocate you in the void of nothingness.

Overall, Throenum have done a pretty neat album and they certainly made a very good impression on my end, and while I do recommend it, it is with the disclaimer of this being an album to experience in full, and that you may need to spin it a few times to get into it.